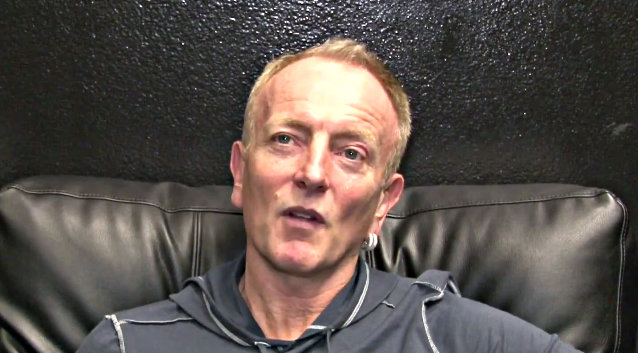 DEF LEPPARD guitarist Phil Collen tells Artisan News that the band will enter the studio on February 1 to begin work on the follow-up to 2008's "Songs From The Sparkle Lounge".

"I saw Joe [Elliott, vocals], Vivian [Campbell, guitar] and Rick [Allen, drums] on Rick's birthday out here on November 1," he said (see video below). "And we were discussing and we were all excited and buzzing about new material. I can't even remember the last time we were like that about that stuff. 'Cause it's been a long time since we've had new recordings out, so it's like a brand new band; you have all these ideas and we're just gonna get together and bash it out."

In a recent interview with Rolling Stone, Collen revealed that the band has plans to record both an EP and full-length album. He explained: "An album would obviously take too long, so we're gonna do about four or five songs, get those out and then [later in the] year have an album come out, so it'll be an EP and an album."

Campbell explained to Billboard that DEF LEPPARD's next release will likely see them delivering elements of their classic tunes while also delving into new territory.

"The band is successful for a certain sound," said Campbell. "It's a brand like Coca-Cola and you've got to give the people what they expect. At the same time, you have to move on."

After completing the successful "Viva! Hysteria" residency in Las Vegas last spring that resulted in the recently released concert video and album packages, DEF LEPPARD is planning to return to Sin City later this year with a "Viva! Pyromania" residency, which will see the group perform the entire classic 1983 album "Pyromania" at each show. The move comes in time for the album's 31st anniversary rather than its 30th, but Elliott told journalist Gary Graff that commemorating that mark wasn't on DEF LEPPARD's agenda last year.

"We ignored the anniversary because I think a lot of these anniversaries are just invented by the record companies to rehash for some bullshit reason, to re-release an album that doesn't need re-releasing because it's never been deleted," he said.

"We agreed to doing the 25th anniversary of 'Pyromania' five years ago, where we put out the second disc which was... basically an extra live album with the Steve Clark lineup, if you like, the way that we were in 1983," he continued.

"The cupboard's bare. There's nothing left.

"They wanted to do a re-release of a 30th anniversary of 'Pyromania', and we just said, 'Absolutely no! The only thing that anybody is going to get out of this is some different liner notes.' I think it's just ripping off the kids, so we said no.

"If somebody wants 'Pyromania Deluxe', it's already out.