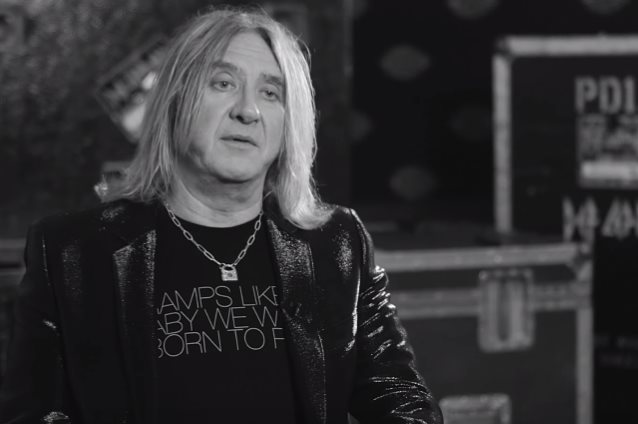 In a brand new interview with Forbes, DEF LEPPARD singer Joe Elliott was asked — after seeing what happened to Chester Bennington and Chris Cornell — if he had any advice for artists on how to deal with the music industry and fame. He responded: "Musicians face pressure from outside of your own brain to deliver all through your career. It's hard for kids and then it gets harder in your thirties because you have a legacy to follow and then it gets harder in your forties when you have family commitments or whatever.

"The path to rock and roll glory is littered with casualties, absolutely. It's not like the great Joe Elliott speaks and everybody goes, 'I want to stop taking drugs now.'

"When you look at our band, we've got two casualties — we lost Pete Willis to alcohol, but he didn't die. We lost Steve Clarke to alcohol and he did. Then you look at somebody like [DEF LEPPARD guitarist] Phil Collen, who's thirty years sober, twenty-six years a vegetarian or the other way around, now a vegan, he's like the fittest almost-sixty-year-old man you'll ever meet.

"We've conquered a lot of negativity in our career to keep going, having watched some people, including our own, fall by the wayside.

"So advice, to me, is a minefield of a word. And it's not something I readily throw out there because it doesn't always work with whoever's reading or listening to what I've got to say."

DEF LEPPARD is celebrating the thirtieth anniversary of its seminal album "Hysteria", by releasing "Hysteria (Remastered 2017)". The remastered anniversary edition was made available on August 4 in various formats via Bludgeon Riffola/Mercury/Ume.