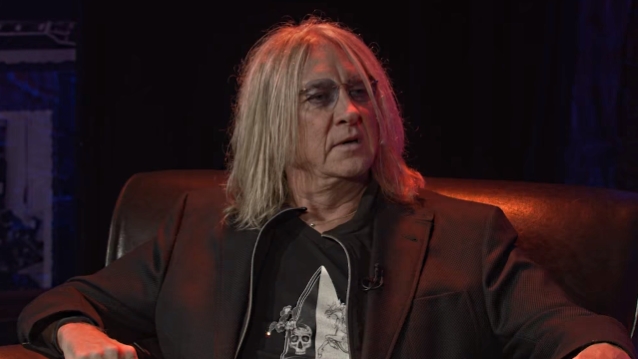 The critically acclaimed conversation series "Speakeasy" has returned for a fourth season on public television's World channel. The six episodes will feature an all-new group of iconic artists, Grammy Award winners, Rock And Roll Hall Of Fame inductees, and beloved musicians engaging in intimate conversations between friends. Each episode gives fans an inside look into some never-before-told stories from some of the world's most prolific performers, including Sting, Shaggy, Joe Elliott (DEF LEPPARD),Lenny Kravitz, members of LYNYRD SKYNYRD, Michael McDonald, and Billy Gibbons. Full episodes will also be available at www.speakeasytalks.com.

A preview clip of the Joe Elliott episode is available below.

"In our fourth season of 'Speakeasy', we are really defining what sets this series apart," said Don Maggi, executive producer. "Sting and Shaggy let loose like they couldn't do on any other tour interview… Joe Elliott wanting to share his stories after he interviewed Ian Hunter in season two… It's as much fun for the artists to participate in our format as it is for our viewers to sit in on that conversation."

Season four kicks off with Grammy Award winners Sting and Shaggy in a lively and hilarious conversation that covers the making of their Grammy-nominated album "44/876", their Jamaican connection, James Bond, Miles Davis, laundry, and more. DEF LEPPARD frontman and the Rock And Roll Hall Of Fame's newest inductee Joe Elliott candidly discusses the band's early days and their legacy with Rolling Stone editor David Fricke.

Multiple Grammy Award-winning musician Lenny Kravitz sits down for a revealing conversation with singer and songwriter Sean Lennon that illuminates their long-standing friendship, Kravitz's career from choir boy to rock star, and the influence that their parents have had on their lives. Southern rock icons Gary Rossington, Johnny Van Zant and Rickey Medlocke of LYNYRD SKYNYRD open up like no past interview they've done, including the story behind their return after a decade-long hiatus to writer Rob Tannenbaum.

"We had a blast doing 'Speakeasy'," shares LYNYRD SKYNYRD guitarist and original member Gary Rossington. "We've been reminiscing a lot on our farewell tour this year and it was so cool to sit down with fans in such a small theater and share some of those memories with them. And Rob Tannenbaum did a great job with the interview; we could have talked all afternoon! Look forward to everyone seeing the episode next year."