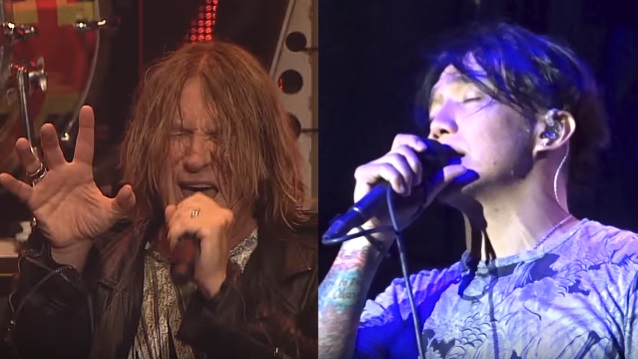 DEF LEPPARD's Tour With JOURNEY To Be Announced This Week?

**UPDATE**: In an interview with the Rock Titan web site conducted this past week, DEF LEPPARD drummer Rick Allen shot down speculation about a 2018 tour with JOURNEY, saying (see video below): "I don't think that tour is gonna happen. It's something that's been talked about, but I'm not sure anything has ever really been finalized. But I hope that, you know, we'll get to hear something in the not-too-distant future."

In a brand new interview with the Marin Independent Journal, JOURNEY drummer Steve Smith apparently confirmed that his band will embark on a six-month tour with DEF LEPPARD in May. The trek, which is expected to include around 60 dates, could be announced as early as this coming week.

DEF LEPPARD guitarist Vivian Campbell hinted at the upcoming tour announcement during a January 10 appearance at the Consumer Electronics Show (CES) in Las Vegas, Nevada. "Busy, busy year for DEF LEPPARD this year," Campbell said (see video below). "A big announcement coming in about a week or so about that."

DEF LEPPARD and JOURNEY previously toured together in 2006. The trek was reportedly one of LEPPARD's most successful U.S. runs since the 1992-1993 "Adrenalize" tour. The DEF LEPPARD-JOURNEY package launched in June 2006 and consisted of three legs, taking the two bands up to November of that year.

At the time, DEF LEPPARD was supporting its covers album called "Yeah!"

DEF LEPPARD guitarist Phil Collen has said in past interviews that he would love to tour with JOURNEY again.

JOURNEY guitarist Neal Schon and keyboardist Jonathan Cain feuded publicly on social media last summer after Cain and some of his other bandmates visited the White House in July, where they were photographed with President Donald Trump. (Cain's wife, Paula White, delivered the invocation at Trump's presidential inauguration.)

"I was not informed by anyone about the White House visit," Schon told Rolling Stone last month. "They have said many times that I wasn't invited. That being said, I wouldn't have wanted to be. We've up to that point never been involved with anything political or anything evangelical or any one religion. Being the founding member... I felt I should have been informed as they went as JOURNEY, not individually."