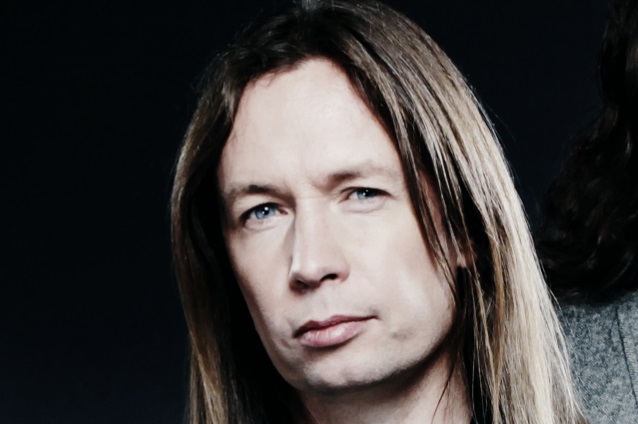 STRATOVARIUS vocalist Timo Kotipelto was interviewed by SpazioRock during his recent acoustic tour of Italy with former SONATA ARCTICA guitarist Jani Liimatainen. The full chat can be viewed below. A few excerpts follow (as transcribed by BLABBERMOUTH.NET):

On STRATOVARIUS's October performance in Milan, during which they performed 1997's "Visions" in its entirety to commemorate the album's twentieth anniversary:

Timo: "We've been playing some of the songs live every now and then, but not the whole album. Of course, it's a different lineup [now] — there's only Jens [Johansson, keyboards] and me from the original guys — but now that I had to 'learn' them again, I was surprised that there's some very good songs on that album. It was super nice, because then it's easy to make the set list when you play the whole album.

"We only did this one show this year for 'Visions'. Last year, we played [1996's] 'Episode', but only in Finland. For us, it's something new. We've done so many albums, and when you start touring for the new album, you need to play old stuff and then you play some of the new stuff, so the last couple of years, we've been playing some certain songs quite often. Now, we decided that, 'Okay, if we can play the whole album in Italy, let's do it.' But that was only this one thing. Of course, it's also for us sometimes — well, maybe also for other bands, sometimes they want to have a break from composing or just playing the newest material. They want to go back."

On when to expect the next STRATOVARIUS album:

Timo: "We have started to write, but we haven't got together yet to show everybody the ideas. I have some ideas and I know Matias [Kupiainen, guitars] has some, and probably Lauri [Porra, bass] and Jens too, so the plan is that probably early, I think, in February, we're going to get together, some of the guys, and we see what we have. Then we start, hopefully, recording next spring, but we don't have a deadline. It doesn't work in our case. We need to compose the songs first and then see where we are."

On whether he plans to ever make another "Blackoustic"-style album with Liimatainen:

Timo: "We don't have any proper plans, because we would need to decide on the songs. Maybe, maybe a little bit later, but not within the next two years. I don't think so, anyways. It's very difficult, actually, to select the songs for the acoustic album, because there's only one song and two vocals, and that's it. Not all the songs work as an acoustic version, but why not? It's been very good feedback, and let's see after this tour whenever we have time, because Jani's going to be busy and I'm going to be busy and then we have this tour together, and we have more shows in Finland. Let's see, maybe, in two years."

On translating power metal songs into an acoustic format:

Timo: "We think that if the song is good, if the melodies are good, then it should be possible to play it with one guitar only. They're totally different from when you are playing with the whole band. It's more intimate, and there's more room to fuck up. You need to do a lot of arrangement for the songs. We've been trying a lot of songs [live] — we've been playing a lot of, especially, STRATOVARIUS songs, and then we play them a little bit — like, maybe we do a couple of gigs — and then we think that, 'Oh, they don't work live.' Some of the songs, they just don't work. The truth is that some songs work better than the other ones. You see the reactions from the people, because when you're playing with the band, if there's thousands of people, people are more far away. When we are just joking on the stage and we don't take ourselves so seriously. Of course, we are here to entertain and we're going to have fun, and sometimes we're talking with the people, because then you hear actually what the people are saying, because they're, like, two meters away. When you're with the band and all the in-ear monitors on, you don't hear anything — you just see people. It's totally different. I like both, of course. I've been playing in a band for more than 20 years, and we've been doing this for the last eight years. Both, I've done quite a lot."

On how it feels to sing other artists' material:

Timo: "The songs are better. [laughs] Of course, we play some cover songs. In the beginning of our duo thing, we played way more cover songs, but now we've been able to bring more [of] our own material, more STRATOVARIUS, [and] there's a couple songs that we've been composing together, and there's at least one CAIN'S OFFERING song, and then I think one song from SONATA ARCTICA that was composed by Jani. But he doesn't want to play any more SONATA ARCTICA, because it doesn't many any sense to him, but when he composed the songs, this is different. I don't mind — if the song is good and we can make it work, then it makes sense to play it. Good songs are always good, but it's difficult to find a good song to play with one guitar. That's the problem."

On any "dreams" he has yet to achieve:

Timo: "In a way, I could say that I've lived the dream that I can earn my living from the stuff that I love to do. I love singing. But then again, of course, it's not a dream [when it] comes to traveling and all the stress about, 'Can I sing tonight? My voice is fucked up.' I don't have any huge expectations. I don't want to be as popular as [THE] BEATLES or anybody. I'm fine with what I am. I'm super-satisfied. I'm happy [with] what I do now."

STRATOVARIUS's most recent studio album, "Eternal", was released in 2015 via earMUSIC.