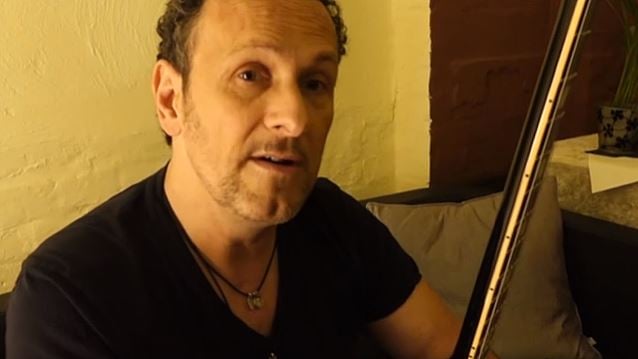 DEF LEPPARD guitarist Vivian Campbell, who was diagnosed with Hodgkin's lymphoma in 2013, has told the Belfast Telegraph that he has to fly back to Los Angeles every three weeks for the course of treatment known as immunotherapy.

"It allows me to continue to work, there's no side effects and I've still got some hair," he said.

"It's not like chemo at all — it's very benign in my case.

"I just have to fly back to Los Angeles every three or three and a half weeks to do infusions."

The former DIO guitarist, who has two tumors in his throat, told the Belfast Telegraph the treatment was "holding it in place" and that his doctors believed the tumors may even have reduced in size.

Campbell has been taking doses of an antibody called pembrolizumab — the same drug former president Jimmy Carter has been using to treat his metastatic melanoma.

Campbell previously went through three rounds of chemotherapy and a stem cell transplant. He told the Salt Lake Tribune in September: "I naively thought that'd be it, and I was done with it. I guess given the benefit now of my experiences with this, I kinda realize that I'll probably be dealing with it for the rest of my life.

"But as far as side effects, there's absolutely nothing that's of any concern — it's just lowered my thyroid considerably.," he added. "But if that's the only side effect, I'll certainly take it. It's a lot easier to deal with than doing chemo."