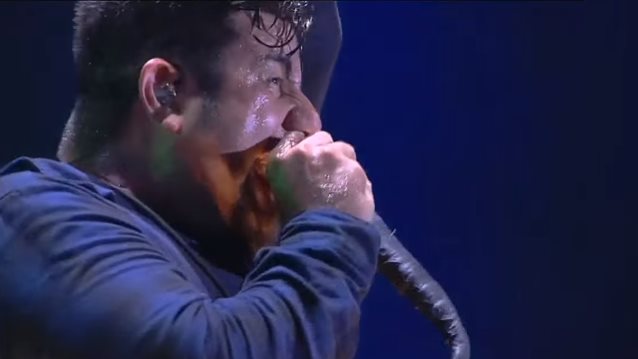 DEFTONES Frontman: 'If We Don't Tour For A Good Third Of The Year, We're Not Gonna Be Able To Pay Our Bills'

During an appearance on this past weekend's edition of Mary Anne Hobbs's BBC Radio show, DEFTONES frontman Chino Moreno discussed the lessons he has learned from 27 years of rocking. You can listen to a clip from the program below.

On having sons who are both involved in music:

Chino: "I have to give advice to my two sons, who are both musicians. And they're both totally different. One of 'em's a total punk kid, who's in a thrash-punk, skate-punk band, whatever. The other kid is a DJ and electronic musician. And both of them, I'm very encouraging to them to have fun and make music. It's really hard to make it in music. If they're gonna be wanting to have families and children and get married and this and that, it'd be good to keep in school for the time being while you can. Be a kid while you can be a kid as well, you know? But obviously enjoy yourselves. I've never discouraged them from doing music; I think it's great. And I like the fact that the music they do is something very much that they've chose to do. They do their own thing and I think that's great. But, you know, I'm the parent now that's, like, telling them to, like, to have something to fall back on, obviously. So I think it's important to know that."

On fans' misconceptions of fame and being in a successful rock band:

Chino: "One of the biggest myths about being a rock star would probably, obviously be the word 'rock star' itself — you know, that everything is given to you. You make a few records, or you win a Grammy, or you have a platinum record and then… that everything's sort of easy. I remember when we first got signed in 1995, in my mind, I thought, 'Wow, we made it.' And then I realized that we left our town of Sacramento and went to the Midwest of America and we're playing for two, three people a night sometimes. So it's always constant work. I mean, even today, it's, like, if we don't tour for a good third of the year, we're not gonna be able to pay our bills. It's not like, I guess, how people perceive it — like, you're gonna get in a rock band and you're gonna be driving around in a Lamborghini. It's not gonna happen. Unless you're Justin Bieber or Adele or somebody, honestly, I mean, you have to actually work to earn a living. I mean, I'm not complaining about that all; I dig it. I like working, I like playing shows, I like making records, so…"

DEFTONES will release its eagerly awaited eighth studio album, titled "Gore", on April 8 via Warner Bros. Records. "Gore" is available for pre-order at www.deftones.com. Those who pre-order will receive an instant download of the first single, "Prayers/Triangles". The album was produced by Matt Hyde and DEFTONES.