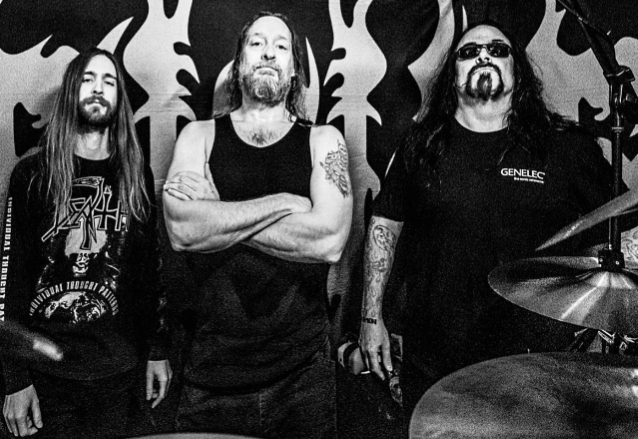 On Monday (November 14),DEICIDE shared a photo of drummer Steve Asheim in the studio, and it included the following message: "Drum tracking has begun! #jesusisabouttoshithimself".

In a recent interview with "The Garza Podcast", hosted by SUICIDE SILENCE guitarist Chris Garza, DEICIDE bassist/vocalist Glen Benton spoke about the band's plans to record the follow-up to 2018's "Overtures Of Blasphemy" album. He said: "The new stuff that we're writing now is really anthem-style stuff. It's really good, man. There's a lot of prog stuff in there, mixed in there. Steve's our prog guy, man; he's the progressive rock guy. He likes to write those really black metal riffs and the progressive stuff. He's an amazing talent, man. He plays piano. He can play sweeps on guitar. He's a drummer. Yeah, he can do it all."

Benton went on to say that the next DEICIDE album was "written last year" before he and his bandmates agreed to embark on a tour celebrating the 30th anniversary of DEICIDE's sophomore album, "Legion". But, he explained, "We're getting ready to hammer this deal out right now and get this thing out."

Nine months ago, Nordberg spoke about how he landed the DEICIDE gig in an interview with "The Zach Moonshine Show". He said: "In 2019, my band THE ABSENCE toured with DEICIDE in the U.S. And we got to know the guys and got along really well. And I actually found out that Glen [Benton, DEICIDE frontman] lives, like, two streets over from Jeramie [Kling, THE ABSENCE drummer] and I, where we live. So Jeramie and Glen became good buddies and they ride bikes all the times. It's a funny little thing, thinking about that. But long story short, [previous DEICIDE guitarist] Chris [Cannella], I believe he's the head of A&R at Dean Guitars so he's focusing on that for right now. I heard that they needed a guitar player, so I learned a couple of songs, made a couple of videos, and Glen saw 'em and liked what he saw. So we had a couple of practices, and bing bang boom, here we are."

In February, Nordberg was asked in an interview with the "Brews N Tunes" podcast if he and his new bandmates have commenced work on the follow-up to "Overtures Of Blasphemy" album. He responded: "They had started most of the new album before I joined, but since announcing [that we are going to celebrate the 30th anniversary of] 'Legion' [by performing the LP in its entirety], we've kind of shifted gears and we're trying to lock that in and get a set prepped just in the event that a show pops up. But they have most of the new album prepped, and then we're hammering out, ironing out some details with the last couple songs. So hopefully that will be out this year. I don't know any concrete plans on when we're gonna start pre-production or recording or any of that. But hopefully this year. That would be awesome. But the material is sounding killer. It sounds like DEICIDE."