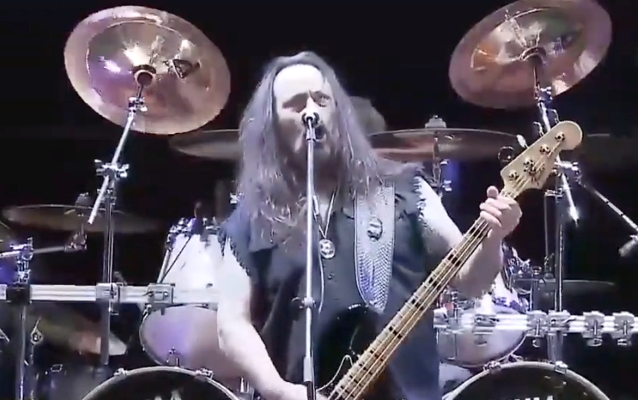 Professionally filmed video footage of DEICIDE's performance at the Rock Al Parque festival, which was held June 29 - July 1 in Bogota, Colombia can be seen below.

DEICIDE's latest album, "Overtures Of Blasphemy", was released in September via Century Media.

DEICIDE frontman Glen Benton told Revolver that the "old-school sound" of "Overtures Of Blasphemy"stems from the fact that "Jason [Suecof] spent a lot of time mixing that thing and he knows our sound from back then so he gives it more of an old-school sound but with more updated technology. Plus, we really went for more of a natural feel on the record. That's why you'll hear me sucking for air while I'm screaming. And there are natural acoustics on the drums. We used a Fender Jazz Deluxe bass on the album so the bass is ominous but not overbearing."

According to Glen, it took a long time "to get the record done between scheduling at the studio and doing shows. Working with Jason, he's booked up," he said. "He's fitting us in here, he's fitting us in there. So it has taken a while to get this thing together. But we're pretty happy with the way it turned out."