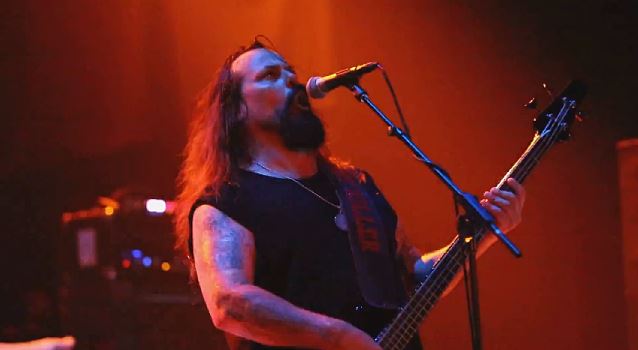 In a recent interview with OC Weekly, bassist/vocalist Glen Benton of Florida death metallers DEICIDE was asked for his opinion on European black metal bands like MAYHEM or WATAIN, who are publicly and overtly Satanic with their music and stage shows. "Well I'm aware of them, and we've played shows with BEHEMOTH before," Glen replied. "They are cool guys, but I could give two shits about their performances or whatever. They do their thing and it's cool for them. As far as WATAIN and their meat-throwing bullshit on stage, it's nothing new; we were doing that years ago at our shows."

Speaking to Sweden's Metalshrine earlier this year, BEHEMOTH guitarist/vocalist Adam "Nergal" Darski said that he "would rather listen to SVARTIDAUDI, KRIEGSMACHINE or ORANSSI PAZUZU" than sit through "the new MORBID ANGEL or DEICIDE" releases. He added: "Their music doesn't do it for me at all, and that's music I grew up with."

WATAIN made headlines in June when the band's frontman, Erik Danielsson, reportedly drenched the audience at a New York concert with a goat skull full of animal blood.

Back in 2008, EMPEROR drummer Bård G. Eithun (a.k.a. Faust) disputedBenton's account of an early '90s meeting with MAYHEM founder Euronymous during which Glen claimed Euronymous — whom Benton mockingly referred to as "Uranus" — was "carrying a mace" that "look[ed] like he stole the table leg off his mom's kitchen table and put, like, nails through it and shit." Benton also claimed Euronymous "was wearing this $1.99 cape that you'd buy at the dollar store during Halloween."