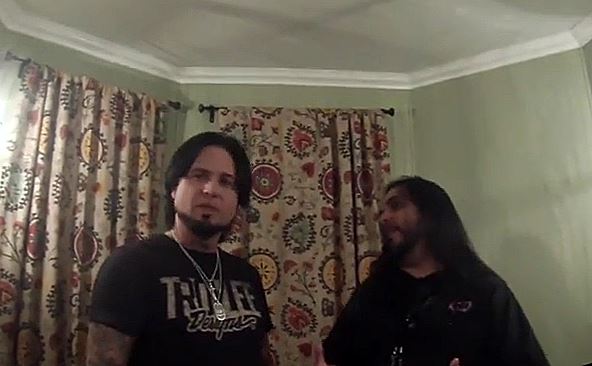 "My very first job was for $3.25 an hour I was a donut packer," said Hook, who grew up in Canada. "I worked at the hub place in the city that made the donuts for the different locations. They would cook 'em, put 'em in baskets and I had to pack the baskets and then load the trucks to go to the other locations. It was my first job out of high school. And it was tough, because I graduated from packer to delivery guy, and what they didn't tell me was that the wasps would come into the truck, so I'm driving the donuts [while trying to avoid getting stung by wasps]. I was, like, 'You guys didn't tell me about the wasps!' So I learned that I would go to the place that had the mosts wasps and get them out of the truck first."

Hal Leonard released a brand new FIVE FINGER DEATH PUNCH guitar tab folio on August 12. The book features a dozen cuts from the band's current hit albums "The Wrong Side Of Heaven And The Righteous Side Of Hell" Volume 1 and Volume 2.