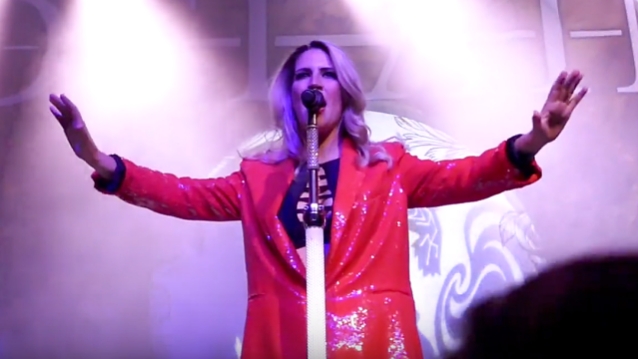 Dutch symphonic metallers DELAIN performed their new song "Burning Bridges" live for the first time this past Thursday night (September 19) at the opening show of their North American tour with AMORPHIS at the Theater Of Living Arts in Philadelphia, Pennsylvania. Fan-filmed video footage of the performance can be seen below.

"Burning Bridges" will be released as a single on September 27.

This past June, DELAIN frontwoman Charlotte Wessels confirmed that the band was putting the finishing touches on its new album for an early 2020 release.

DELAIN drummer Joey De Boer is missing at least the first few shows of the band's current tour. According to a Facebook post by the Dutch metal band, "there has been a delay" in obtaining Joey's U.S. visa and "it may take as much as a couple of weeks to get" the paperwork processed. Filling in for him is AMORPHIS drummer Jan Rechberger.