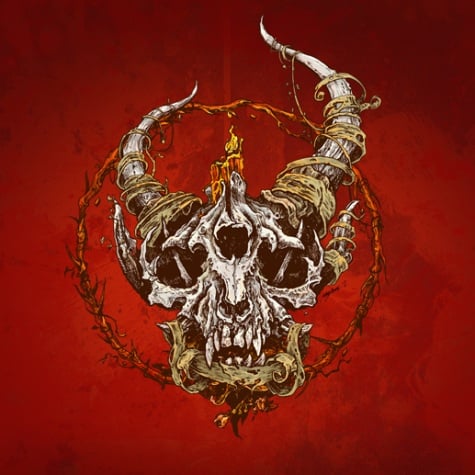 The first in a series of webisodes featuring behind-the-scenes footage from the making of "True Defiance", the sixth full-length album from Seattle-based Christian metallers DEMON HUNTER, can be seen below, The CD will arrive on April 10 via Solid State Records.

Produced by Aaron Sprinkle (ANBERLIN, EMERY) and mixed by Jason Suecof (ALL THAT REMAINS, TRIVIUM),"True Defiance" finds DEMON HUNTER continuing in their hard rock evolution while embracing the components that have always formed the backbone of their music: true metal, dark rock and balladry.

With DEMON HUNTER, the album artwork carries just as much of a creative and personal significance as the music. Artwork and imagery have been paramount ever since the now iconic DEMON HUNTER symbol first appeared on t-shirts and stickers in 2002.

The "True Defiance" album art, created by Ryan Clark, frontman and co-owner of Grammy-nominated design firm Invisible Creature with his brother (and former DEMON HUNTER guitarist) Don Clark, and illustrated by Angryblue (KORN, BLEEDING THROUGH, THE ACACIA STRAIN) shows continued commitment to excellence in all facets of the band.

"Anyone that knows DEMON HUNTER understands that the visual element of the band means a great deal to us," explains Ryan Clark. "Every album cover is a challenge, in that it's a re-envisioning of the band's iconic logo. We try, with each record, to make sure that re-envisioning is creative, unique and well-executed. Justin Kamerer is the artist behind the work this time, and I really love how the vision for 'True Defiance' has turned out. His attention to detail and his creative approach to our logo bring a really fresh look to something that's been used in over 100 different ways over the last decade. To me it feels like this is what the DEMON HUNTER logo was always supposed to look like."

On "True Defiance", Grammy-nominated artist Ryan Clark, Tim "Yogi" Watts (drums),Jonathan Dunn (bass) and Patrick Judge (lead guitar) are joined by their longtime friend Jeremiah Scott (guitar),whose credits as a metal musician (THE SHOWDOWN) and producer (LIVING SACRIFICE) are well established. The partnership marks a vital new chapter in the celebrated history of DEMON HUNTER, who are currently marking their 10th year of writing, breaking and erasing the rules of hard rock. Not ones to rest on their laurels, however, the members have created an album that not only lives up to their own lofty standards, but sets a new high-water mark for what DEMON HUNTER is capable of.

"We've been extremely underwhelmed with metal for the last five years or so, and that's been the fuel to create this record," Clark explains. "With an extreme over-saturation of false, fleeting, trend-hopping noise in today's metal scene, we had to make something we've been longing to hear. Something truly meaningful and artistic. Something our fans would love and something that will turn the heads of those who have ignored us for the past decade."

"True Defiance" marks DEMON HUNTER's first outing since 2010's "The World Is A Thorn", which debuted in the Billboard Top 40 and was hailed as the heaviest, fastest, and most aggressive record of the band's career. The album yielded hit videos in "Collapsing", which has racked up 1 million views online, and "LifeWar", which was viewed over 100,000 times in the past month. "The World Is A Thorn" was preceded by "Storm The Gates Of Hell" (2007),"The Triptych" (2005),"Summer of Darkness" (2004),"Demon Hunter" (2002),and the three-disc CD/DVD set "45 Days", which collectively sold half a million copies and garnered airplay on college and specialty radio, Fuse and MTV2's "Headbangers Ball" and earned the band cover features in publications like Revolver and HM.

"This record is without a doubt our most aggressive," says Ryan Clark. "Every DEMON HUNTER record must be a step up from the last. I know that's a goal for every band, but it seldom works that way — especially today, especially in metal. It seems like most bands' prime years are long behind them. I refuse to let that be the case for us."

In other news, DEMON HUNTER has announced a string of European dates with support from DEADLOCK, NIGHTRAGE and INSENSE. The trek will kick off on April 30 in Kouvola, Finland and conclude on May 5 in London, England.