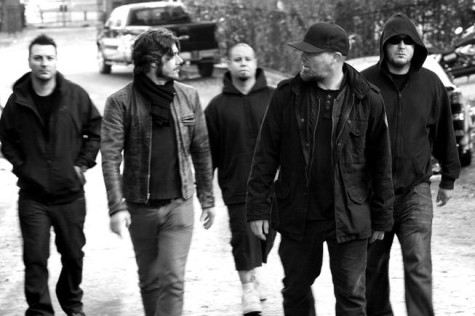 LIMP BIZKIT last year parted ways with Interscope, the label that released all of the band's records thus far through its subsidiaries Flip, Geffen and Suretone Records.

Even though LIMP BIZKIT's latest album, "Gold Cobra", was the band's first CD to feature the original lineup of Fred Durst (vocals),Wes Borland (guitar),Sam Rivers (bass),John Otto (drums),and DJ Lethal since 2000's "Chocolate Starfish And Hot Dog Flavored Water", it has sold less than 75,000 copies in the United States since its June 2011 release, according to Nielsen SoundScan.

During an appearance on the November 21, 2011 edition of the "Poolside With Dean Delray" podcast, Durst stated about the band's current status, "One of the things with 'Gold Cobra' was that that was a record, for us, to do for ourselves, for the core fans, for some of the people that we know in the industry — its wasn't our step forward to make a big pop, smash radio record; we just didn't wanna make that record at that time. We have been working for awhile now to renavigate where we are going to take LIMP BIZKIT, and finally we have been able to get off our label and become independent. . . We do very, very good on our touring, and we mainly tour outside the United States, because we wanna make sure that when we push something to our homeland that it kind of catches their attention in a way that they're used to it catching their attention. It seems like in the United States, man, they're waiting on a song, they're waiting on a hit, and the rest of the world doesn't necessarily operate that way; they're, sort of, career people. So I'm waiting until we can really give them something they can sink their teeth into and then they can be reminded about how ill LIMP BIZKIT is live, 'cause we're having a lot of fun doing what we do, and if it's not fun anymore, we don't wanna do it. We don't wanna go out in the United States without it being a lot of fun, so we're just waiting until that song happens . . . without forcing it. We're not gonna go in the studio and try to write a mega-hit song that people in America are gonna like; when it happens, we'll know."

Formed in 1995, LIMP BIZKIT achieved massive success with its studio album "Significant Other", which debuted at #1 on the Billboard chart and went on to sell over 16 million copies worldwide. In 2000, the band's third studio album, "Chocolate Starfish and the Hot Dog Flavored Water", continued the band's success by selling approximately 1.5 million copies in its first week, making it the fastest-selling rock album of all time.