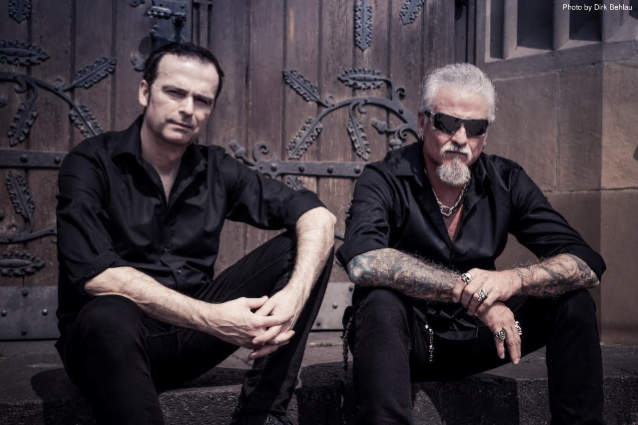 Schaffer states: "I'm excited to be releasing another DEMONS & WIZARDS album after all of these years. I feel like we've put together something really special, and I'm looking forward to hearing what the fans think about it. I'm proud of this album. It's definitely a journey of epic proportions.”

Kürsch adds: "2019 is an extremely exciting year for DEMONS & WIZARDS in general. We have accomplished a lot. A lot! This third album is the peak of our career for sure. Mark my words, you will love this album!"

Presales for "III" will kick off December 13.

During a press conference at this year's Hellfest, Jon stated about the songwriting process for "III": "At the end of [ICED EARTH's] 'Incorruptible' album cycle, I went out to the mountains in Arizona and hiked for a month and spent one week with my [ICED EARTH] bandmates, because we were going on hiatus. So the five of us went out into the desert and stayed together, and then I stayed three weeks by myself and got an enormous amount of power from that and energy from just staying away from the music business and not talking to management. I talked to Hansi about twice, and other than that, I was completely disconnected from everybody, and it was a really great thing. So when I got back to songwriting, it was, like, 'Boom!' Everything went really fast, and I knew there was really, really strong material, and it's good. And the arrangements came, and everything came, and I started sending Hansi stuff. I knew, from an instrumental standpoint, that this is some of the best material I've ever written. And then when he added his stuff on top, it was, like, 'Okay, we have something really special for the people.' And at the end of the day, I actually don't care if you guys love it, because I do, and [Hansi] does. And that sounds harsh, but that's art, and it's honest — it's actually honest. And it's real, and it is actually some of the best material I've written in my entire life, from my standpoint, and what [Hansi has] done, it's killer. And people are gonna be shocked, I think — very pleasantly shocked — by what's coming, honestly."

DEMONS & WIZARDS recently released remastered versions of its first two albums on all digital platforms. Remastered by Chris "Zeuss" Harris (ICED EARTH, QUEENSRŸCHE, SANCTUARY),"Demons & Wizards" (2000) and "Touched By The Crimson King" (2005) were also released as expanded deluxe editions in June. The expanded editions feature liner notes by Kürsch and Schaffer as well as bonus material and were released as a limited-edition digipak, deluxe 2LP with etching and LP booklet as well as digital deluxe editions.