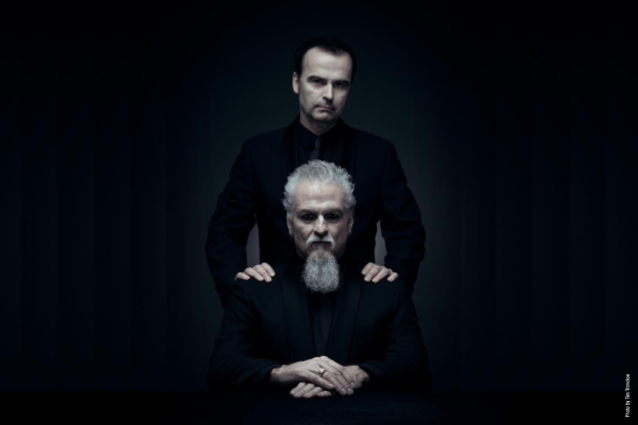 The disc's second single, "Midas Disease", can now be streamed below.

Kürsch says: "Meanwhile, you all should have heard the epic 'Diabolic', and as second impression of 'III', we offer you the complete opposite now: the four and a half minutes of 'Midas Disease'! The song reminds me of one of these good old hard rock bands, playing on and on for more than 40 years, I guess you'll know whom I refer to once you hear it. 'Midas Disease' has a cunning vibe, which I absolutely love. It is pure honesty."

Schaffer adds: "I had a working title of 'Unbroken' for this song, and when I sent it to Hansi, he instantly liked it. We both feel it added a totally different dimension to an already very diverse album. It's straight-up fists-in-the-air hard rock/heavy metal song, which was certainly inspired by the riffing and rhythmic abilities of Malcolm Young and I personally dedicate it to his memory. You are missed, Sir Malcolm!"

During a press conference at last year's Hellfest, Jon stated about the songwriting process for "III": "At the end of [ICED EARTH's] 'Incorruptible' album cycle, I went out to the mountains in Arizona and hiked for a month and spent one week with my [ICED EARTH] bandmates, because we were going on hiatus. So the five of us went out into the desert and stayed together, and then I stayed three weeks by myself and got an enormous amount of power from that and energy from just staying away from the music business and not talking to management. I talked to Hansi about twice, and other than that, I was completely disconnected from everybody, and it was a really great thing. So when I got back to songwriting, it was, like, 'Boom!' Everything went really fast, and I knew there was really, really strong material, and it's good. And the arrangements came, and everything came, and I started sending Hansi stuff. I knew, from an instrumental standpoint, that this is some of the best material I've ever written. And then when he added his stuff on top, it was, like, 'Okay, we have something really special for the people.' And at the end of the day, I actually don't care if you guys love it, because I do, and [Hansi] does. And that sounds harsh, but that's art, and it's honest — it's actually honest. And it's real, and it is actually some of the best material I've written in my entire life, from my standpoint, and what [Hansi has] done, it's killer. And people are gonna be shocked, I think — very pleasantly shocked — by what's coming, honestly."

DEMONS & WIZARDS recently released remastered versions of its first two albums on all digital platforms. Remastered by Chris "Zeuss" Harris (ICED EARTH, QUEENSRŸCHE, SANCTUARY),"Demons & Wizards" (2000) and "Touched By The Crimson King" (2005) were also released as expanded deluxe editions in June. The expanded editions feature liner notes by Kürsch and Schaffer as well as bonus material and were released as a limited-edition digipak, deluxe 2LP with etching and LP booklet as well as digital deluxe editions.