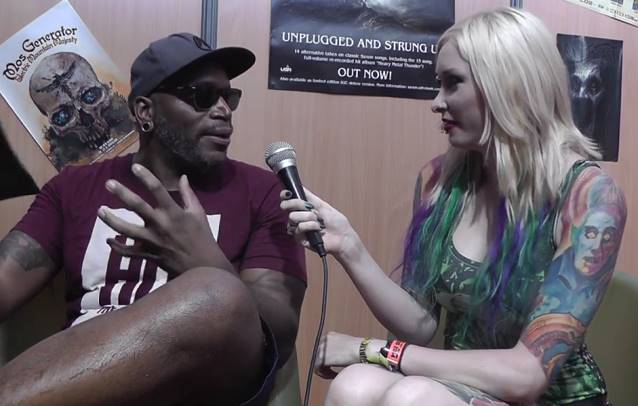 Hayley Leggs of TotalRock Radio conducted an interview with vocalist Derrick Green of Brazilian/American metallers SEPULTURA at this year's Hellfest, which was held June 20-22 in Clisson, France. You can now watch the chat below.

Asked about former SEPULTURA frontman Max Cavalera's claim in a recent interview that he heard a rumor SEPULTURA wasn't going to make any more studio albums after 2013's "The Mediator Between Head And Hands Must Be The Heart", Derrick said: "I have no idea [where he got that from]. It's absolutely ridiculous. All this stuff is ridiculous.

"If people really wanna what's happening, then they can easily ask us, and we've never come to that conclusion at all. We definitely wanna have another album, for sure.

"People just really need to question a lot of stuff that they're seeing, or people are talking.

"There's too much talk and not enough playing. For us, we play all the time — many, many different places — and we try to do as much as possible with our music and show that on stage. Not be so much in the media talking about other people and other bands and things like that. I passed that in high school — a long time ago — and I didn't even do that in high school. So, for me, it's just actually ridiculous. You get face to face and fucking speak to us. But other than that, it's just bullshit….

"What becomes frustrating is just going through the same thing over and again, but it's, again, a lot of stuff that's just not true. Like I said, focus on the music. [People] love the soap operas. Not us. [Laughs] Like I said, we love to play and I think you can really see that from the energy on stage and from the power of the last album and the albums before that. And I think that's where we do most of our speaking and stand true to what we believe."