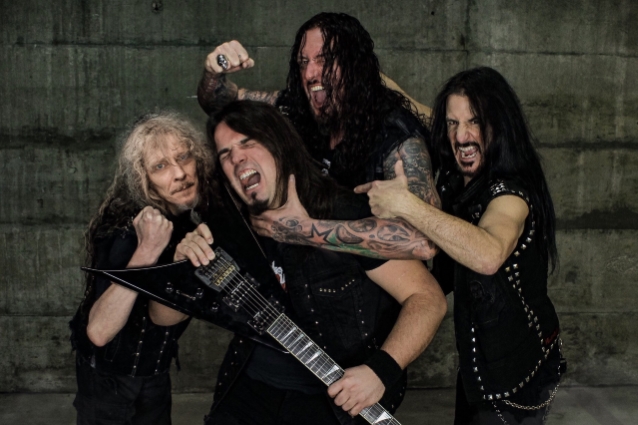 German thrash metal veterans DESTRUCTION have revealed the cover artwork for their upcoming 17th studio album, "Born To Perish". This visualization was created by acclaimed artist Gyula from Hungary, who has also created artwork for ANNIHLATOR, GRAVE DIGGER, STRATOVARIUS, TANKARD and many more.

A trailer where you can follow the creation of the artwork is available below.

Gyula states: "Schmier wanted to get a simple and different image than my previous DESTRUCTION covers. When we discussed the new concept, I was happy with this approach because I had the chance to use a different tool, no painting but ink-drawing style.
"When the band mentioned the album title, I got the idea of a crest composition without the typical brave lion or eagle but vultures with two heads and we filled the image with several symbols.

Mastermind Schmier adds: "We wanted something basic this time. I had something like an emblem in mind, a stamp, a DESTRUCTION coat of arms.

"Born To Perish" will be released on August 9 via Nuclear Blast. The disc was recorded in January and February 2019 with V.O. Pulver (PRO-PAIN, BURNING WITCHES, NERVOSA) at Little Creek Studios in Switzerland and is the first DESTRUCTION album to feature Randy Black on drums and second guitarist Damir Eskic.