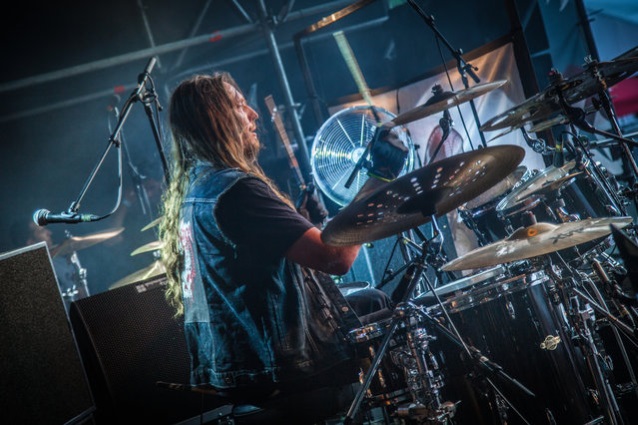 Longtime DESTRUCTION drummer Wawrzyniec "Vaaver" Dramowicz has commented on his decision to leave the band at the end of March due to family reasons.

He says in a statement: "It is never easy to make hard decisions. It is time for me to part ways with DESTRUCTION — the band that has hosted me for nearly a decade; my brothers, my best buddies. Above all, these guys are great musicians that I have enjoyed countless performances with.

"Eight years with DESTRUCTION means more than words can describe. We shared the stage more than 500 times, travelled to the moon and back at least twice! It is time to drift my career towards more calm waters which surround my family. At the same time, DESTRUCTION needs to explore new exciting and challenging stages of their career.

"I would like to thank Schmier and Mike for giving me the opportunity to be a part of DESTRUCTION. I tried my best to enhance the band's sound and groove with my skills. I could see the fans' reactions around the world that came to the gigs and the signing sessions with tears in their eyes… just happy to see the band they had listened to since the beginning of the '80s. It has been a truly unforgettable experience! I wish you guys all the best. I know you will find the right replacement with the skills and dedication that you deserve for your incredible band.

"I am not quitting my profession either. It is just a change in life that we all sometimes go through and have to adjust to new circumstances. Hope we meet again one day or night on your rough DESTRUCTION seas!"

Schmier adds: "There is not much more to add in this moment of sorrow. We all know it really sucks to separate with people you cherish for reasons beyond control. So 'family first' is something we all have to accept. Vaaver was not just the best drummer we ever had and I don't wanna diminish the dignity of any of our old drummers here, but he also was a killer dude and a great friend. So yes, this really hurts… Of course, he will stay a part of our clan and the big DESTRUCTION family! Cheers for all those fantastic years, our paths will definitely cross again and all the best for your future, Vaavski!"