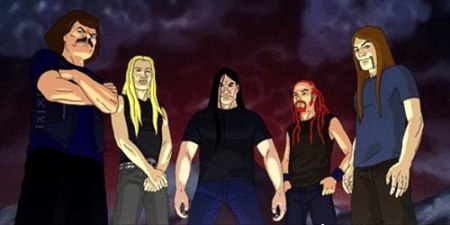 DETHKLOK, the animated band from Adult Swim's "Metalocalypse", performed this past Friday night (July 13) on the USS Midway battleship in San Diego, California. The group made its first live appearance of 2012 as "Metalocalypse" came to life at the San Diego Comic-Con convention. Those attending the free concert enjoyed new animation and new songs from DETHKLOK's upcoming album.

A 15-minute fan-filmed video report on the concert can be seen below.

Created by Brendon Small ("Home Movies") and Tommy Blacha ("Da Ali G Show"),the "Metalocalypse" TV series launched in 2006 and kicked off its fourth season at the end of April on Adult Swim. One of the most popular series on the cable network, "Metalocalypse" portrays DETHKLOK as a death metal band with enough popularity to be the world's seventh-largest economy. In reality, DETHKLOK is the highest-selling band in death metal, exploding onto The Billboard 200 with "The Dethalbum", debuting at No. 21 in 2007 and "Dethalbum II" at No. 15 in 2009. Both albums contain full-length versions of songs partially heard on the show.