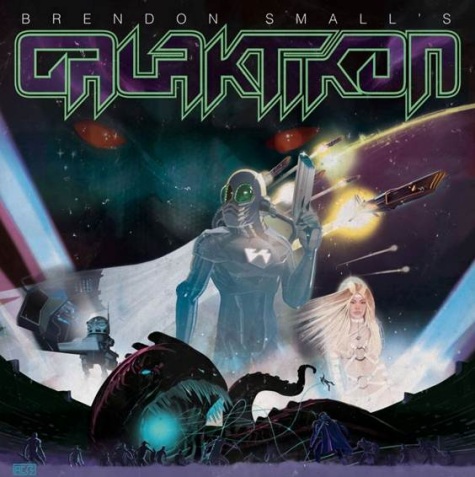 Brendon Small, co-creator of "Metalocalypse", the smash hit animated series on Adult Swim featuring the fictitious metal band DETHKLOK, was kind enough to invite Gibson.com into his Silverlake, California, studio to discuss his music and TV career, working with METALLICA, technology, his signature Gibson Thunderhorse Explorer and the sheer joy of playing music. He also showcased for the first time ever his new Snow Falcon prototype that's in the Gibson pipeline. And, if that wasn't enough, he even taught some metal riffology in a couple of exclusive guitar lessons. Check out the footage below.

Brendon Small has written and produced BRENDON SMALL'S GALAKTIKON "A High Stakes Intergalactic Extreme Rock Album", the debut release from his long-awaited side project. Released on April 29, the CD's arrival coincided with the Season 4 premiere of "Metalocalypse".

"This album should be thought of as an audio comic book, an over acted chamber drama, a ridiculous premise that takes itself way too seriously all the way to the end," states Small.

The BRENDON SMALL'S GALAKTIKON "A High Stakes Intergalactic Extreme Rock Album" cover art was designed by Antonio Canobbio and can be seen below.