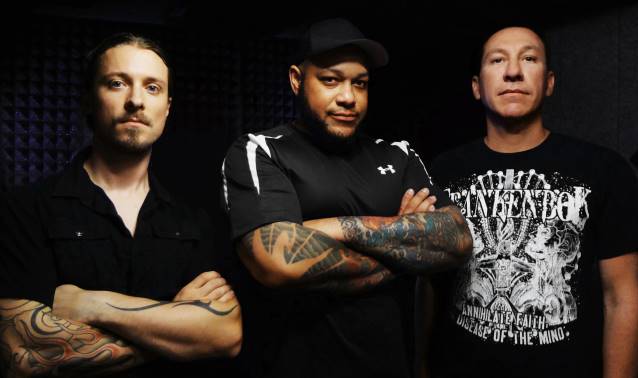 Nuclear Blast Entertainment has announced the signing of DEVIL YOU KNOW.

DEVIL YOU KNOW is the intersection of three undeniable talents from the world of heavy music. Howard Jones: the former KILLSWITCH ENGAGE and BLOOD HAS BEEN SHED frontman, who garnered two gold records and a Grammy nomination during his decade-long tenure with the Massachusetts band. Francesco Artusato: celebrated solo artist and guitarist with THE FRANCESCO ARTUSATO PROJECT and ALL SHALL PERISH. And John Sankey: drummer for the Australian band DEVOLVED, who has also worked with FEAR FACTORY and DIVINE HERESY. The sum total of the three has come together as DEVIL YOU KNOW, yielding a sound as singular as it is unforgettable.

DEVIL YOU KNOW was born out of Artusato and Sankey's creative quest to stretch beyond their extreme metal backgrounds. The two had written over a dozen songs before even attempting to lock down a singer. "We were unsure if Howard would be interested," says Sankey." Yet, when KILLSWITCH ENGAGE's former frontman received the material, a creative ideal began to solidify.

Finally connecting in Los Angeles during the last months of 2012, a highly distinctive sound began to become apparent. "It turned from bare-bones musical ideas into something that surpassed any of our expectations" says Jones. "It went from something we thought was going to be a fun, heavy project into something very real." It was during a recording session at the start of 2013 with producer and former MACHINE HEAD and SOULFLY guitarist Logan Mader (who has previously worked with GOJIRA, FIVE FINGER DEATH PUNCH) that DEVIL YOU KNOW's ideas began to alchemize into something none of the bands members would ever expect. "It became a departure from what I'm known for," says Artusato. "I wasn't focusing on technical guitar parts (even though I still love that aspect of writing) but simply on writing what felt best for each individual song."

"World-class vocalists like Howard Jones are the rarest commodity in metal music these days," says Nuclear Blast Entertainment's Monte Conner, whose recent NBE signings include San Francisco Bay Area metal legends MACHINE HEAD and European superstars WITHIN TEMPTATION. "Howard has a tonality and richness to his voice that very few singers have. The band's initial demos got me very excited but sometimes you strike gold. DEVIL YOU KNOW just made an incredible record that has surpassed all expectations. The vocals are everything fans have come to expect from Howard but at the same time there is a depth, dimension and variety to his singing that shows incredible growth and elevates him in every way. Add to that world-class musical talents like Francesco Artusato and John Sankey both as players and songwriters. This is ground zero of something really exciting!"

"I had worked with Monte before I left KILLSWITCH and have long known and respected him," says Jones of the former Roadrunner Records A&R chief. "He has a vision for both music and business that is second to none and made it an easy choice when it came to signing to the label. Monte and the Nuclear Blast staff understand who we are, what we have individually accomplished and where we are going as a band."

While the finishing touches are being put on DEVIL YOU KNOW's debut album, the writing and recording process "was surprisingly easy," states Artusato. "When we get together it just works." The band is also quick to sum up the studio vibe with producer Mader as "intensely creative," says Sankey. "Logan definitely helped us realize and define the DEVIL YOU KNOW sound." Jones agrees: "He went from producer, to unsung member, to friend."

"It's a different style of music for me," says Jones of DEVIL YOU KNOW's unique sound. "It's heavy as anything any of us are known for but I get to do some different things people won't expect. I've been singing almost all my life. Being around good songwriters and musicians in my former bands really helped mold me into who I am now."

DEVIL YOU KNOW's Nuclear Blast Entertainment debut is currently slated for an early 2014 release, with international touring plans and a full touring lineup to be announced shortly.

Visit the band's Facebook page to hear a demo version of the song "Shut It Down" and get a small taste of what's to come.