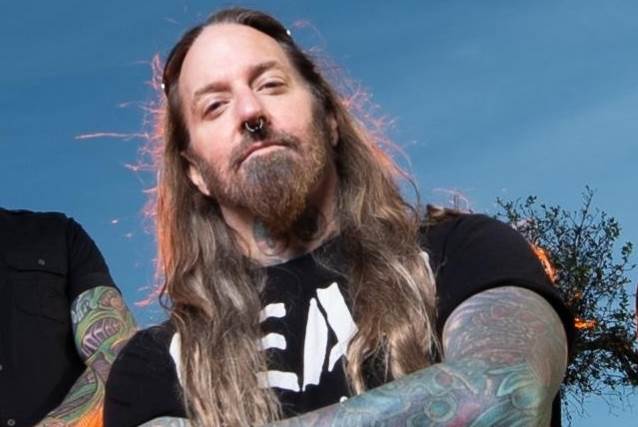 DEVILDRIVER frontman Dez Fafara has further explained the rationale behind their forthcoming "Outlaws 'Til The End: Vol.1" full-length album of outlaw country-gone-metal anthems. The disc, which is due July 6 via Napalm Records, is described in a press release as "both a startling curveball and a ferocious statement of individuality from a band who have been a constant and effective force in the heavy metal world for the best part of two decades now."

In a recent interview with the "Rock Talk With Mitch Lafon" podcast (hear audio below),Fafara was asked where the idea for "Outlaws 'Til The End" came from. "I've grown up around all sorts of music," he said. "I'm a fan of all sorts of styles, everything from blues to black metal. I've always loved outlaw country, specifically for the lyrical content. I think it's the most poignant on the planet. The storytelling is just absolutely on point.

"We had an 'off' date with DEVILDRIVER where we went into the Mall Of America. We did one of those photo shoots where everyone had a shotgun and dresses up like cowboys. About two weeks into the tour, I had that thing in the back of my tour bus and I kept looking at it. I knew it was going to be three years until the next DEVILDRIVER [album of original material]. I'm the guy who doesn't like to make people wait. You're either going to get a record every two years or even sooner. When I was younger, you got a record every year from a band. Knowing it was going to be three years and a three-year wait, we said, 'We need to give these listeners something great to listen to in the interim. What are we going to do?' I'd love to do a covers record.' That's not something you need to go in and spend three years writing, so we can go ahead and bite this off. But metal bands have covered '80s tunes, they've covered other metal tunes, they've covered punk rock. It's like, 'Let's do something that really hasn't been done. Let's lend guests to it, which has never been done, and let's try to do something fantastic.' In the back of the tour bus is how we came up with the ideas for the songs. I basically laid down to the guys what we have to do. I was, like, 'You got to do Wille [Nelson], you got to do Johnny [Cash], you got to do Waylon [Jennings] and kind of laid down the ground rules there. Then everybody put their list together. We narrowed it down from about 50 tunes and then guys came out of the woodwork with what they wanted. Mike Spreitzer, my guitar player, was, like, 'Look, I want this song 'Dad's Going To Kill Me'; it's an anti-war song.' Then I listened to it and looked at streaming and I was, like, 'Okay, people have watched this 40 million times. I love the lyrical content. Let's do it.' Neal Tiemann, my guitar player, brought 'Thousand Miles from Nowhere'. He's a big Dwight Yoakam fan, as well as I. My out-of-the-box one was THE EAGLES. Are they outlaw country? No. But if you look at most of their photos from the early days, they're dressed in western gear. They have bullet belts across their chest, etcetera, and we did 'Outlaw Man' by them. That's how this all kind of came into the workings. We knew we were going to have three years between records, we knew we wanted to do something special and then, it started spiraling completely out of control when the guests started popping up."

Since "Outlaws 'Til The End" is dubbed as "Volume 1", Fafara was then asked whether DEVILDRIVER plans to cover more outlaw country songs, or, go in a different direction. "It's most definitely outlaw country, and I just don't know when that's going to happen," he said. "This thing was almost two years in the making. Once I got the music, this thing was two years in the making to get it done. I almost dug my grave several times. The budget ran out halfway through. It was insanity to get done. But I did put 'Volume 1' on this one knowing if I wanted to bite it off later, [we could tackle it in the future]. I had a ton of guests who wanted to guest or they were in the studio themselves, they were on the road, they couldn't do it, so I've got a guest list of over 20 people that want to be on 'Volume 2' and a lot of them are massive names in the industry in punk rock, outlaw country and heavy metal. So, knowing that, we put a 'Volume 1'. We are definitely going to do a 'Volume 2', and it's definitely going to be outlaw country, but I don't know when that's going to be done."

Fafara was also asked about his recent decision to stop drinking alcohol altogether after spending many years on the road and in an environment not exactly conducive to staying sober. "I've been sober almost two years, not quite two years," he said. "No 'bottom-of-the-barrel' moments. There were moments in my early days where I was the guy who had a half a bottle of whisky and a tab of acid riding on top of the tour bus in COAL CHAMBER. I was into the insanity of it. But I never had any bottom-of-the-barrel moments. There was never, 'God, I keep waking up hungover,' or, 'What did I say last night?' or any of that going down. It was just a situation where I think after the age of, like, 30, traces look bad on a dude. They just look bad on a guy.

"I run Oracle Management, which has massive clients like Jose Mangin from Sirius radio and [producer] Ross Robinson, massive clients. I run SunCult, which is a surf-skate lifestyle brand, with Randy [Blythe] from LAMB OF GOD and my wife Anahstasia and my kids. I run two other bands, I've got other companies. I've got to be on it. I'm up at 5 a.m. I'm in bed at midnight. I've got ADHD. I sleep five hours a night. I can't sleep any more. So, no real bottom-of-the-barrel moment. It was kind of a turning point where I said, 'Why am I having a cocktail before the show? Why am I having a cocktail after the show? What is this?' It became a thing. Two hours before the show, you start getting ready, you go in the back lounge, you have a cocktail with your bros, you listen to some music, you go do the show, afterwards, maybe you have a cocktail or two, then you go to bed. I was, like, 'I'm going to put this down.' And it came in a moment when I was very inspired by my wife, who is heavily influenced by medication, who is heavily influenced by just living well, living healthy, being happy, right? And, she says to me, 'Now this is the point in your life.' I've dropped 30 pounds, I've got a fucking six-pack for the first time since my 20s. I was out skateboarding last night or the night before with my kids until 10:30 at night, I've got three sons. It was, like, 'Yeah, I'd like to live long, I'd like to live healthy, I'd like to have my shit together.' I don't want to be the guy because I'm a manager, I've got to go to shows, I don't want to be the guy drinking. It doesn't look good on you. It's, like, 'Your manager's drinking? Your manager's drunk?' If your manager at your show is drunk, come over to the Oracle, I'll make your life a lot better as an artist."

"Outlaws 'Til The End" was produced, mixed and recorded with Steve Evetts (THE DILLINGER ESCAPE PLAN, EVERY TIME I DIE, SEPULTURA, THE CURE),with Sprietzer also lending recording talents. The album was mastered by renowned engineer Alan Douches.