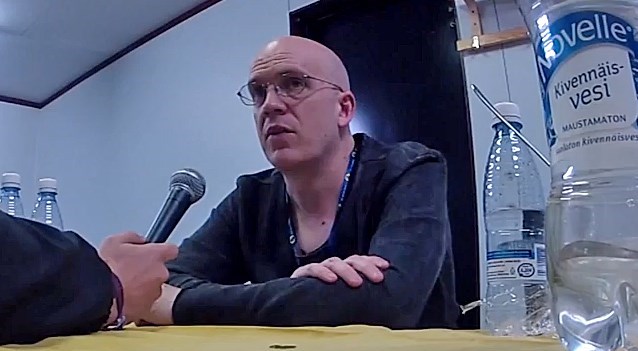 Kaaos TV conducted an interview with Canadian multi-instrumentalist, singer, songwriter and producer Devin Townsend prior to his August 10 performance at Jurassic Rock in Mikkeli, Finland. You can now watch the chat below.

Townsend played a special concert October 27, 2012 at the Roundhouse venue in London, England as part of a one-night-only event, dubbed "The Retinal Circus", that was recorded for both DVD and Blu-ray, to be released on October 29 in North America (Sepember 30 in Europe) via InsideOut Music.

"The Retinal Circus" will be released on several formats, including a lavish and bonkers limited edition befitting of the man himself, and which took months of hard work to put together. The complete list of formats is below:

Says Devin: "So closing in on eight months of work, we're almost finished with 'The Retinal Circus'!

"It's been a huge amount of work for everyone, from the show, down to DVD and Blu-ray authoring, artwork, logistics (not to mention the show itself!),but we're almost there, and when watched in its entirety, it's really a heck of an experience!"

Devin previously described "The Retinal Circus" as "a retrospective of my career in music to date, with the central theme being a metaphor of how life and the adventures therein are a 'circus' of sorts. The show involves a cast of characters and guests that support this theme through carnival type performances. A story about how a troubled young man dreams of fantastic scenarios, (illustrated through the music of my back catalogue),which ultimately crests in the characters realization that life is all about the relationships we have with each other. This is the first opportunity I have been given to make theatrical representations of my music."

* A retrospective of Devin Townsend's entire career
* Full choir and theatrical cast
* Visual and aural enhancements unlike any show Devin has done to date
* Several special guests
* Circus and carnival performances and cast
* Art exhibit of Devin's albums, including explanations of each album

In an interview with Metal Insider, Townsend stated about "The Retinal Circus": "It's like such a clusterfuck on stage. Whether or not people who're new to it understand what I'm trying to do, I like the idea that it's like… When I watch it, I'm, like, 'That's pretty much how I feel it should look like.' For better or for worse, it's like this crazy chaos."

Regarding what inspired the setlist for "The Retinal Circus", Townsend said: "I tried to get a bit of everything, but at the end of it, it was most important to include the songs that we could illustrate the best. The show itself had this peculiar story and so that story arc required me to choose songs that would contribute to that, rather than just elbow it in there. So we missed some stuff. 'Terria' wasn't in there, and whatever, but it leaves room for the next thing."