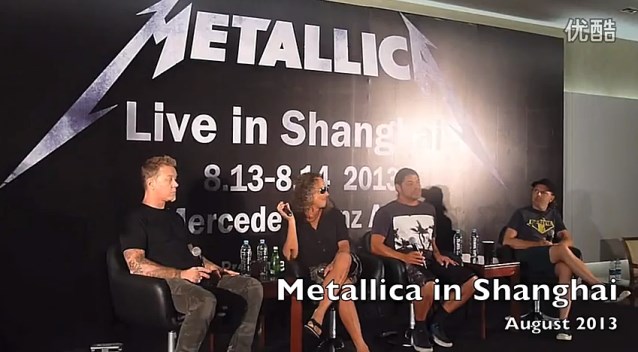 METALLICA played for the first time ever in China this week, doing two sold-out shows at the Mercedes-Benz Arena in Shanghai on Tuesday (August 13) and Wednesday (August 14). The first night sold out in record time and faster than any other Western act that has played the country before.

Video footage of METALLICA's August 14 press conference in China can be seen below (courtesy of Time Out Shanghai). A couple of excerpts follow below.

On filming a documentary in China:

Lars Ulrich (drums): New experiences bring opportunities for new collaborations and new creative endeavours — it's that simple. Being here in this wonderful country and feeling the energy and excitement, the idea came up to celebrate it and to try to document it and to try to get the experience out. As you know, there are a lot of you, and there may be 20,000 of you who came to this arena yesterday and today, so we figured that if we filmed and shared the experience then maybe we could get to more of you and maybe there could be a next-level relationship between METALLICA and China that could last for decades. The idea came up fairly last minute and we love creative endeavours where we make it up as we go along. There's an impulsive energy that comes with that that can be very beautiful and kind of cool and the last few weeks this idea came together of filming here and maybe bringing some local bands into it and bringing some actors in and maybe some way bridging this into the 'Through The Never' movie that we made in the United States. We are making this up as we go along, but it's all being documented — everything we do is always documented — so we're excited about that and we think that there is something cool that will come out of it. Whatever that is, we're not quite sure yet, but we'll do our best to make it shareable and worth everybody's while."

On interaction with Chinese fans:

Ulrich: "We've been doing meet-and-greets and the interactions with the fans have been very emotionally engaged; they're very appreciative and thankful that we're here. Obviously there is a language barrier. What we try to do, we try to loosen the moment with banter and so on and some of that doesn't seem to translate when there's language issues or whatever, but you can feel that there is a passion and that there's been a longing for this moment that is really special. Most of the time, the communication just comes from the audience when you're up on stage. You sense what's going on and what's coming back at you. People all over the world have different ways of expressing and you sort of learn that there is a correlation between the way people express themselves in different cultures to what they throw at you in gigs. In Italy, they're very much like passionate southern Europeans, in Latin America this happens, and in certain Nordic countries, they're a little more conservative. You learn those patterns along the way, but you could obviously sense that this moment had been a long time coming."

On piracy and bootlegged METALLICA goods being sold in China:

Ulrich: "The one thing increasingly that we focus our energies on is trying to discern between what we can control and what we can't control. Increasingly, getting wound up and spending a lot of time on things that you can't control, it's just... I'd rather FaceTime with my kids or do something else. It is what it is. And that's a whole separate conversation about Chinese copyright issues, which maybe is not the time to do now. You can't control that, so you just turn a blind side to it as best you can."

The band's current Asian run will take it to South Korea, Malaysia, Singapore and Indonesia over the next 10 days.

The only other live date on METALLICA's schedule for the rest of 2013 is September 19 in Rio de Janeiro, Brazil.

Next up for METALLICA is the release of the band's 3D movie, "Metallica Through The Never", which arrives in limited release on September 27 before expanding its run on October 4. A soundtrack album arrives on September 24.

The movie is part concert film and part fictional narrative, with the latter centering on a roadie played by Dane DeHaan who must go on a mysterious mission for the band during the course of a live performance.