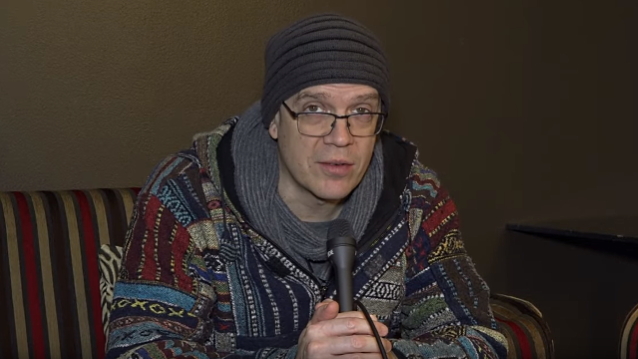 DEVIN TOWNSEND On Deciding To Finally Revisit STRAPPING YOUNG LAD Material: 'I'm Sick Of Being Afraid Of It'

Prior to his November 21 performance in Helsinki, Finland, Devin Townsend spoke with Kaaos TV. The full conversation can be seen below. A few excerpts follow (as transcribed by BLABBERMOUTH.NET).

On how the current leg of his ongoing "Empath" tour — during which Townsend performs with a full band — differs from its initial leg, in which he performed solo acoustic sets:

Devin: "I think the only way if differs is just that there's 10 people on stage this time, but my mindset's pretty much the same. I think no matter what I do, it's pretty much the same. I don't think the underlying energy is that bigger. I think it's more of just I've got a vision that I'm trying to achieve, but I realized over the past few years that I need more experience to do it how I feel it should be done, starting with just me on stage and then 10 people on stage and then maybe five people on stage in different bands and different iterations of the work, it allows me to sort of have some experiences that I hope to learn from."

On how he recruited the musicians with whom he's now performing:

Devin: "People just come into your orbit. I don't actively seek people out. In fact, one thing that I tend to find works against me working with people is when they try and propose themselves to me. Through life, I guess, you run into people. These are people that I ran into."

On the set list he chose for the tour:

Devin: "With a situation like this where you've got a limited amount of time for rehearsal and everything costs a lot of money, you've got to be a little more intentional about the set list, so I wrote a set list for this [tour] that was something I wanted to play. It was really important for me this time to play songs that were more selfish as opposed to maybe what I'll be doing with 'Volume II', which will be more audience-pleasing. It makes perfect sense to me. I've been doing it for so many years. Touring is hard, and touring is complicated emotionally. Obviously, with this many people and this much production, it's very costly, so I figured that after doing it for this many years, it's important for me to do one tour where I do it the way that I want to do it."

On how material from "Empath" translates live:

On whether any songs from the album are particularly challenging to pull off live:

On the tour's next leg:

Devin: "I'm going to do a heavier band which includes STRAPPING [YOUNG LAD] stuff, as well as DTP stuff. I'm going to do something that's very chill and mellow, and then I'm going to do 'Empath' in its entirety. By that time, hopefully I will have found the musicians that I want to work with for the next record."

Devin: "I'm sick of being afraid of it... Maybe it had baggage. Maybe it was the band that had baggage for me, but musically, STRAPPING was what I was writing then just like 'Empath' is what I'm writing now. It's no different, so for me to vilify part of my creative past makes no sense to me. I don't think I'm even facing [my demons]; I think I'm just letting them a voice. I just think that for me to be afraid of a part of myself that was obviously upset, to keep that from having a voice, to me, just doesn't make any sense. It's like, 'Just figure it out.' My objectives are musically to get to a place that I haven't been yet, and I think that [at] this particular stage of my career, it's just clear to me that the only way to get there is to get through all this shit.

On whether his decision portends an SYL reunion:

Devin: "Naah. I love 'em, but that train's left the station a long time ago."

On whether he feels like he has to play certain songs live:

Devin: "I don't feel like I have to do anything, but I feel like I'd like to because people want to hear it. It's the same thing, but without that sort of feeling of obligation."

On whether he ever worries about repeating himself:

On the status of his unreleased "The Moth" symphony:

Devin: "I haven't thought about it for months now. I think my reasons for working on 'The Moth' at that time were rooting in things that I thought they were going to become important to me, but they just kind of faded away. I've got all this material and this concept for 'The Moth', but right now it just seems sort of unimportant. I've got something else that I'm working on that makes much more sense to me. I think as a musician, I just follow where I'm going, and you never know where things are going to go. Life just changes on a dime — things happen, and you go in a different direction... That's how life works. I have no idea where I'm going to be 10 minutes from now."

On playing the role of bandleader:

Devin: "Touring with this many people requires getting everybody on the same page, so before we go on stage, we listen to music and try to interact with each other and have some moments where we're on the same page. But I think my biggest issue with touring and music in general is [that] I get bored super easily, so I have to be careful when I'm touring. Part of my job is to keep myself from letting myself get lazy with it... I get anxious on a social level because I'm always very sensitive to whether or not people are getting along, but in terms of a musical level, I'm learning how to control it, and I feel that as long as I'm leading it with some sort of sense of kindness as opposed to trying to just be a tyrant about it, then it's something that's within my capacity to do.

On what he'd change about the music industry if given the opportunity:

On what he hopes to receive from audiences:

Devin: "They don't have to give me anything. I'd like to give them something. I want people in this particular climate in the world of political and social unrest to have a bit of a vacation. It's for me too, right? I want people to enjoy themselves. I want people to have a good time, and I think that the show is a lot of fun."