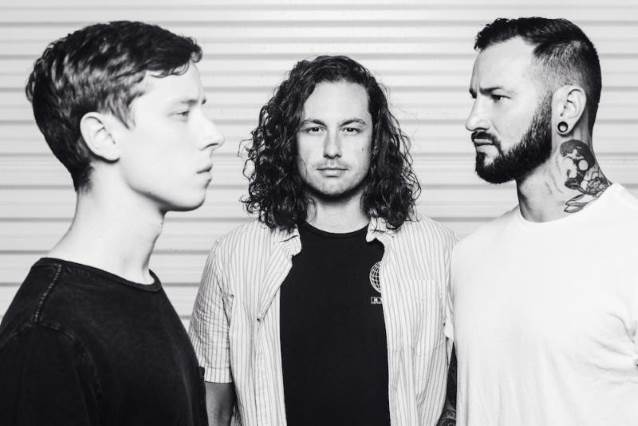 Blake Allison and Joey Walser of DEVOUR THE DAY are launching a movement they hope will revolutionize the way musicians engage with their fans. Tired of the same old "rock-star", bandcentric marketing ploys, they've decided to flip the narrative and hit the road this summer to make their community of fans the true stars of the show. This is a tour with no stages, no tickets, no t-shirts to buy — just a community of rock fans coming together to celebrate the transforming power of music. Starting July 13, the band will embark on a 6,000-mile cross-country trip through 10 different cities to connect with their fans at free "meet-ups" designed to foster meaningful, genuine dialogue about how music has impacted their lives. There will also be photo booths, new music listening stations, and other set ups designed to bring the community together. At the conclusion of each meet-up, the band will perform what they're calling a "campfire" acoustic set of their favorite songs.

"We want nothing from our community but their time. We won't ask you to spend any money to show your support," Walser says. "You don't have to win a contest or share a post or buy a VIP ticket to be involved. All you have to do is come to a city near you that we are stopping in, and meet up to discuss the story of how music has impacted your life. It's something that is bigger than 'likes' or 'shares' or 'follows'. It is a real connection between human beings and everyone is invited."

A six-part documentary series telling the story of their trip and all the amazing people they've met along the way will be launched in August in the weeks leading up to the release of their third studio album. To craft the series, they've teamed up with Vers Creative, a global branding agency that specializes in authentic storytelling, as well as the award-winning team at Neighborhood Film Company, who have created Oscar-qualifying short films and worked with global brands like Nike, Coke, Reebok and Universal. In the spirit of community, this campaign will also be bolstered by a host of industry-leading sponsors all committed to this groundbreaking, grassroots campaign.

"This will truly be a one-of-a-kind partnership DEVOUR THE DAY has put together," Dean Guitars says of the campaign. "We are all coming together to tell the real stories of how music has impacted this community, and in a beautiful and original way. It's going to be incredible. We are so honored to be a part of this groundbreaking series!"

Ultimately, Blake Allison doesn't see this as some new way to approach their music marketing and their fans; he sees it as finally discovering the right way. "The whole idea around #soundtracktoYOURstory is that each fan of music, whether it's rock or jazz or pop, brings their own set of experiences into that music — their dreams, their joys, and their sufferings," he says. "To leave those stories out, to make it about us, is to deny the very heartbeat of our community. This trip is about putting those stories on the world's stage."

Find more on Devour the day