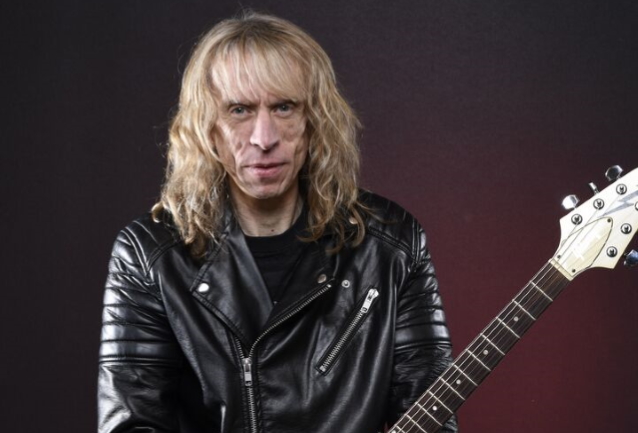 DIAMOND HEAD's BRIAN TATLER On Next Studio Album: 'We've Pretty Much Got The Material Ready To Go'

NWOBHM (New Wave Of British Heavy Metal) pioneers DIAMOND HEAD will enter the studio in the coming months to begin recording the follow-up to 2019's "The Coffin Train" album for a tentative 2023 release. In a new interview with TotalRock, guitarist Brian Tatler said (as transcribed by BLABBERMOUTH.NET): "We haven't had the chance to record the drums yet, but as soon as we can, that's the next thing. We've pretty much got the material ready to go as demos. We've done rehearsals where we record the rehearsals and we've done home demos and things. But the next step will be get in the studio and get the drums down and then we can build on top of the drums. So that [won't happen before] next year now. 'Cause of the SAXON tour [with DIAMOND HEAD as the support act] in October [and] November, we'll probably start that in January."

Asked how he would compare the new DIAMOND HEAD material to the band's classic songs or even some of the more recent albums, Brian said: "I think it will probably be like "The Coffin Train' in sound, but I think the songs are gonna be even better because I've had more time this time to work on the material — almost two years I spent either writing new material or working on old material that I hadn't finished off. So it was a good opportunity to really dig deep and find some killer riffs. And I think it'll be fantastic. I'm very confident."

In an episode of "Tatler's Tales", Tatler was asked for his opinion of METALLICA's cover versions of his band's classic songs. "They're great," he said. "They're always more powerful and a little faster than the DIAMOND HEAD versions. I mean, they're a great band. They [have] their own sound. Of course, it was very flattering. The first song they covered was 'Am I Evil'. They were the first band that ever covered a DIAMOND HEAD song. And it came out in 1984; it was on the 'Creeping Death' 12-inch single, which was on Music For Nations. And I was just really flattered that 'Lars's [Ulrich] band' had covered one of our songs and done such a respectful job and worked out the guitar solo. Everything was really good — really close to our version, but a bit more modern, a bit tougher, [with] more attitude."

"The Coffin Train" was released in May 2019 via Silver Lining Music. The album was recorded at Vigo Studios in Walsall, Circle Studios in Birmingham and Raw Sound Studio in London.