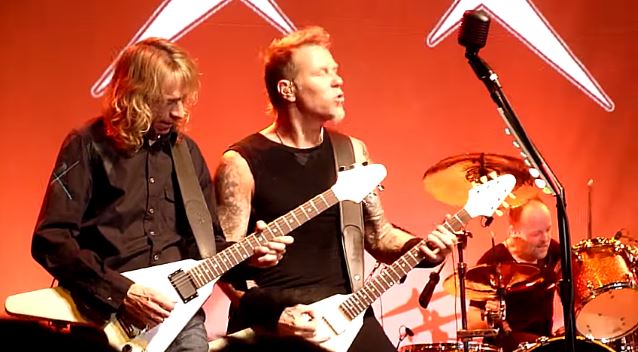 DIAMOND HEAD's BRIAN TATLER Says It Was 'Great' To Perform 'Am I Evil?' With METALLICA

On whether he still gets inspired to create new music:

"Not so much. I know it's a nice idea, and I'm sure if we were signed to EMI and we could sell a million copies of anything we put out, we would probably be in the studio making albums all the time. But we're not. So the idea of creation is a lot of hard work, and I'd have to fund it, I'd have to find a studio, engineer, blah blah blah. So it's quite expensive and time consuming and a little bit frustrating, the amount of work that it would take for us to write and record a new album. So even though I come up with ideas, I usually just keep them on the backburner and wait for an opportunity or reason to work on them, really. And we've done two albums with [singer] Nick [Tart]. We haven't done anything for a couple of years, but, you know, something might appear.

"I used to really get off on the creative side, but at the moment, I quite enjoy just playing live and playing the old songs. And sometimes we bring in a song that we haven't played live before, or we play a song that we never played very often — maybe did it for a whole. We've literally got some songs that we haven't played for 20-25 years, so it's nice to bring them back out and polish them up a little bit."

On performing DIAMOND HEAD's "Am I Evil?" at the 2011 installment of the UK's Sonisphere festival with members of the "Big Four" of 1980s thrash metal — METALLICA, SLAYER, MEGADETH and ANTHRAX:

"It was great. It's kind of a nod — isn't it? — towards DIAMOND HEAD to say, 'Respect. You're an important band. You might not have sold millions of records, but you're an influential band.' And it's nice to be influential. I mean, it's an important part of music — people pushing it forward somewhere new and not just copying and doing more of the same. I sometimes think of it, it's like a stepping stone — isn't it? — from bands like [BLACK] SABBATH towards METALLICA. DIAMOND HEAD took it faster and a bit sharper, a bit harder. I love BLACK SABBATH, but you can't just do BLACK SABBATH again. I mean, some bands do, but I was not interested in just rehashing BLACK SABBATH, I wanted to at least give something back to this music that I love. I don't wanna just take from it and repeati t; I wanna do something of my own."

Tart joined DIAMOND HEAD in 2004 as a replacement for Sean Harris.

DIAMOND HEAD was a big influence on METALLICA, which recorded a cover version of the DIAMOND HEAD song "Am I Evil?" in 1984 and released it as a B-side to their "Creeping Death" single (and later on their "Garage, Inc." album).