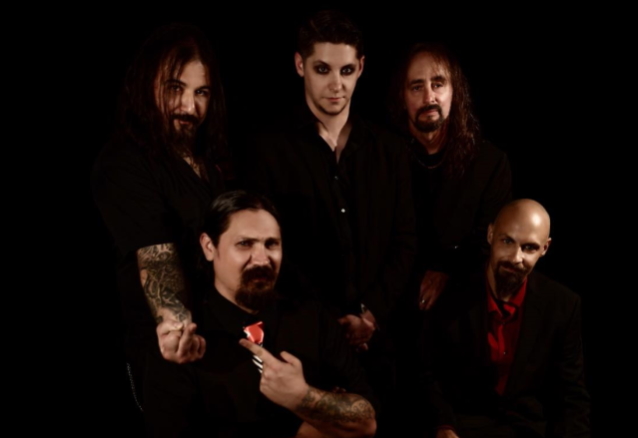 DIEHUMANE, the new band featuring former EXODUS guitarist Rick Hunolt, has finished recording its debut album. The 11-song effort, which will include an as-yet-undisclosed "10-minute cover," is currently being mixed by longtime STATIC-X producer Ulrich Wild.

Vargas announced the recordings' completion in an Instagram post on Thursday (June 2). He wrote: "As of today, the DIEHUMANE album has finished recording. Ten originals and a 10 minute cover. The album is also over halfway mixed because Ulrich Wild is an absolute beast and we only have a few more to mix, then mastering.

"I'm super proud of this album. It's definitely it's own thing and only sounds like itself, which was always the most important goal and what made it worth doing in the first place. I'm pretty sure it won't be what some people are expecting, and it's definitely not gonna be some people's cup of tea, and that's perfectly fine. What no one will ever be able to say about it is that we were following others or trying to fit into a certain niche.

"And, as a guy who has sat with these songs for over a year, and since I know y'all are interested, I'll say it now: Rick Hunolt's guitar work on this is going to knock people flat. Every solo on here is a classic. There is the shit-ripping solos that he is known for, but then there's a bluesy and jazzy side of his playing that I'm super excited to see people discover. As well, Sal's drumming on this literally sounds like somebody awakened a sleeping giant. There's a song on here that we nicknamed 'The Bruiser' that would be just as heavy, dynamic, and intense if you stripped all of the other music off and just left the drums.

"To nutshell it, if you've read this and are still interested, you'll love it and it'll be worth the wait. Our first video shoots in a few weeks, so it's not much further now."

The news of Hunolt's project was first broken by BLIND ILLUSION's Mark Biedermann who took to his Facebook in February to write: "Here's what's really going on. Rick Hunolt's new band DIE HUMANE is going to blow your mind. I wish I could share what he gave me but just know this it is fresh, new and different with amazing vocals and top notch Guitar playing! That is after one listen to one song. Now let me get back to you in a few minutes as I have just received more. Dang it's good to be in the loop! Thank you Rick!"

Rick discussed his exit from EXODUS during a November 2021 appearance on "Put Up Your Dukes", the new podcast hosted by ex-EXODUS singer Rob Dukes. He said: "During the recording of 'Tempo', Gary [Holt, EXODUS guitarist] had just gotten clean a little while prior to that, and I was still using. But I've gotta say, Gary Holt — my hat's off to the man for… He never sweated me. Not once did Gary say, 'Dude, you're a piece of shit. I'm gonna fire you from the band if you don't get your shit together.' He never said nothing. He let it take its course, you know what I mean?

The San Francisco Bay Area thrashers' latest disc is the follow-up to 2014's "Blood In Blood Out", which was their first release since the departure of Dukes, the group's lead singer of nine years, and the return of Steve "Zetro" Souza, who previously fronted EXODUS from 1986 to 1993 and from 2002 to 2004.

Back in April 2019, Hunolt rejoined Holt and other EXODUS members Tom Hunting (drums) and Souza to perform several of the group's classic songs during a METAL ALLEGIANCE concert in San Francisco, California. More recently, Hunolt joined EXODUS on stage in August 2021 at Psycho Las Vegas in Las Vegas, Nevada and in March 2022 at 3rd And Castro in West Oakland, California.

The original lineup of EXODUS consisted of guitarists Kirk Hammett (now in METALLICA) and Tim Agnello, Hunting and vocalist Keith Stewart. Holt joined the band in 1981, while Kirk left two years before EXODUS's debut album, "Bonded By Blood", saw the light of day.