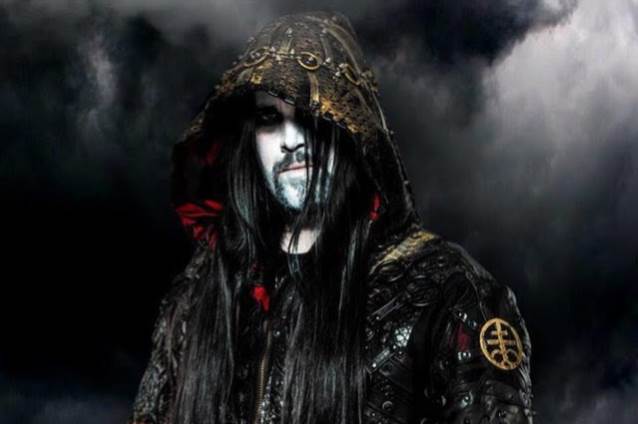 DIMMU BORGIR has announced the addition of Swedish bass player Victor Brandt (ENTOMBED A.D., FIRESPAWN) to the group's ranks. The Norwegian symphonic black metal titans will play their first show since 2012 in June and will visit all corner of the world throughout this year and 2019, and Victor is ready to storm the stage with vocalist Shagrath, guitarists Silenoz and Galder, keyboardist Gerlioz and drummer Daray.

Victor comments: "It's a great honor and pleasure to be a part of the mighty DIMMU BORGIR. And such great timing for me to start at the release of their new album, 'Eonian', which, in my opinion, is their best album so far. The members of the band are equally awesome to their music so I am looking forward to good times ahead."

The band adds: "We are very excited to have Victor become a part of the team! His experience, dedication and craftmanship is very much appreciated and we look forward to sharing the world stages with him!"

Released on May 4 via Nuclear Blast, "Eonian" contains 10 new tracks, produced by the band itself and engineered by Jens Bogren. Emerging from the dark minds of the three songwriters, "Eonian" follows a philosophical concept, dealing with the illusion of time.

Silenoz told Metal Shock Finland about DIMMU BORGIR's long-awaited follow-up to 2010's "Abrahadabra": "We feel that we're sitting on the best album that we could possibly do at this time, and personally, I think it's definitely our best album to date. Obviously, that's something that everybody says, but if I didn't believe that we would do our best album, there wouldn't really be any point doing a new one. So, yeah, I'm really excited about it, and I know that quite a few fans will probably be positively surprised."

As for the musical direction of DIMMU BORGIR's new effort, Silenoz, said: "I think it's safe to say that [the parts that are] more epic and majestic are more epic and majestic, and the same goes for the brutal sound of DIMMU and also the primitive and more black metal sound of DIMMU is more black metal this time around. So you will have the more extremes of each part that we are known for."