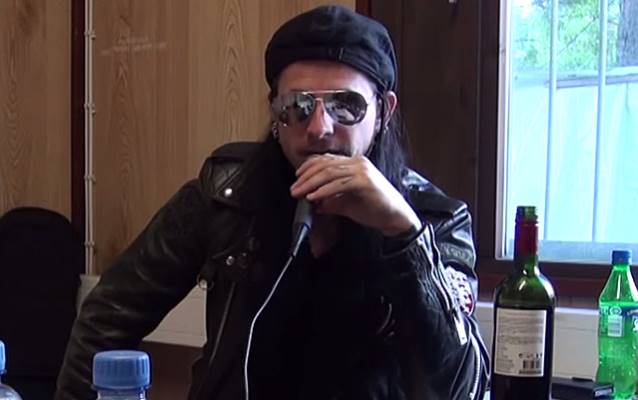 DIMMU BORGIR's SHAGRATH On CHROME DIVISION: 'It's Definitely Not A Side Project; It's A Full Band'

On June 20, Kaaos TV conducted an interview with Shagrath (a.k.a. Stian Thoresen) of DIMMU BORGIR and CHROME DIVISION when CHROME DIVISION played at the Nummirock festival in Kauhajoki, Finland. You can now watch the chat below. A couple of excerpts follow (transcribed by BLABBERMOUTH.NET).

On how different it is playing guitar with CHROME DIVISION compared to singing for DIMMU BORGIR:

Shagrath: "I see myself as… it's the same person, but in a different character. It's like darkness and light. It is a completely different world from DIMMU BORGIR, and that is why I am doing it, that is why I do CHROME DIVISION, and I've been doing this for ten years with CHROME DIVISION. We [CHROME DIVISION] were not doing too many shows in the first couple of years we existed, but now we have a lineup that is very eager to do more shows and more tours. And since the [release of] the last record ['Infernal Rock Eternal'], [there] has been a lot of requests to do both festivals and also tours — especially in South America. We've been to Brazil, we've been to Germany several times, England…. And [now] it's the first time in Finland [for] CHROME DIVISION. We're expanding. [Laughs]"

On how difficult it is for him to juggle DIMMU BORGIR and CHROME DIVISION considering that DIMMU is almost like a full-time job:

Shagrath: "Actually, I have a day job and I have two bands, and yeah, there's a lot of things going on. But, of course, it's easier to be more active with CHROME DIVISION when DIMMU BORGIR had more, like, a break for the last year or two. So I had more time to focus on the latest CHROME album and to do more stuff. But it's actually quite hard; I can't be everywhere at once. It's challenging to get everything sorted, and I wish I could more. We have to turn down a lot of offers for CHROME DIVISION because of other things we're doing. But we do as many shows as we can, and we really enjoy playing. And I think we have got kind of a status, too — we have a reputation for being a cool rock and roll live band. So I really enjoy it, and I'm gonna continue it for a long time to come."

On whether he still considers CHROME DIVISION to be a "side project":

Shagrath: "It's not a side project. I guess it could [have been viewed] as a side project the first years we existed — it was more [about] finding where this fit in, kind of. But with the [CHROME DIVISION] lineup now, it has changed. For me, I think it has changed for the better. And it's definitely not a side project; it's a full band. Everyone is focused on it and everyone wants to do more. And we have even started making new songs for another record. So yeah, we're building the band."

On the drastic difference in musical styles between CHROME DIVISION and DIMMU BORGIR:

Shagrath: "That's why I'm doing it. 'Cause I see CHROME DIVISION more as a therapy session. [Laughs] Because I've done DIMMU for over 20 years, and, of course, my heart is still there, but I think it's also important to have something… a drastic difference. It creates the right balance for me also, because I'm a very big fan of rock and roll music myself, so… I get the outlets that I want to [have]. It's the best of both worlds — singing in DIMMU and [playing] guitar in CHROME DIVISION. For me, it works great. I know still a lot of people don't undertand it, but I just have to tell them that they need more time to actually not be narrow-minded and start listening to it, and maybe they will enjoy it."

On how some of the more narrow-minded black metal fans may not appreciate CHROME DIVISION's music on the first listen:

Shagrath: "Oh, I was very narrow-minded 15 years ago also. But now I'm almost 40 years old, so you change the inspiration source and you get older and hopefully a little bit wiser. I find, actually, inspiration for creating dark music from other genres than black metal. It could be even pop music or ambient stuff, so that triggers something that you create a dark atmosphere. It doesn't necessarily have to come from listening to another black metal band."

On DIMMU BORGIR moving away from the traditional "black metal" genre:

Shagrath: "We don't really like to be put in a category, 'cause we are so much more than a black metal a band. So, for us, it's music and it's art and something we can relate to. And we don't have to label our music black metal. Call it extreme metal, call it melodic, symphonic… whatever you want. It's a combination of so many different inspiration sources."