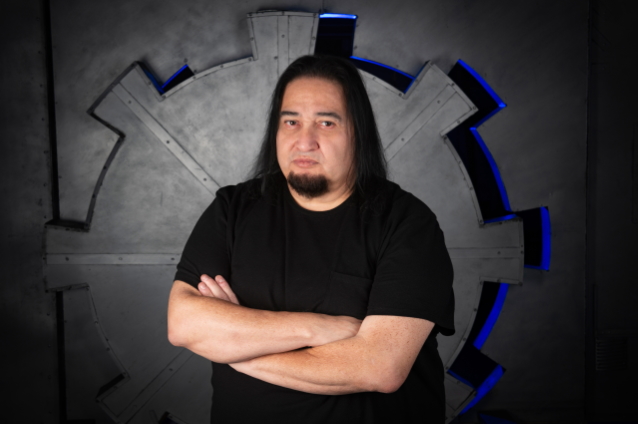 DINO CAZARES: 'I Look Forward To A Different Chapter Of FEAR FACTORY'

FEAR FACTORY guitarist Dino Cazares, who has yet to publicly reveal the identity of the band's replacement for Burton C. Bell, spoke about the singer change in a recent interview with El Lado Oscuro. He said (as transcribed by BLABBERMOUTH.NET): "The future is gonna be definitely very challenging for sure. Everything is — life is. Every day we wake up can be a new challenge. But it's how we take on those challenges. And for me, it's been very positive.

Regarding what he was looking for in Bell's replacement, Cazares said: "I don't want to get somebody who can't necessarily represent the past; I want somebody who can do that. But I also want this person to have his own identity moving forward in the future — just as when we have to step into the past that he's able to handle that as well as what we create moving forward."

FEAR FACTORY will release the first song featuring the band's new lead singer prior to the group's North American tour with STATIC-X. The 37-date "Rise Of The Machine" run, produced by Live Nation, will kick off on February 21 in Portland, Oregon and run over five weeks, wrapping up on April 3 in San Francisco, California.

This past August, Dino told Bucketlist TV that FEAR FACTORY's new frontman has experience and is "kind of known" within the metal scene.

Dino also addressed his statement from earlier this year that he wanted to give an "unknown guy a shot" at fronting FEAR FACTORY. He said: "Well, it wasn't like I was only looking for somebody that nobody knew. I was looking for all different [types of singers]. Sure, if the guy turned out to be, or the girl turned out to be, someone that nobody knew and I gave 'em that shot, yeah, great. I was open to all of it, is what I'm saying. Male, female, whatever, known, unknown — I was open to all of that. And it turned out to be somebody who is kind of known, I guess. Kind of known. He does have experience."

In October 2020, Dino issued a statement in which he said that the door for Burton to come back to FEAR FACTORY wouldn't "stay open forever." The guitarist also revealed that Burton "lost his legal rights" to the FEAR FACTORY name "after a long court battle" with drummer Raymond Herrera and bassist Christian Olde Wolbers. "I had the opportunity to do something right, and I felt that obtaining the name in full was the right thing to do for the both of us, so after nearly four years we can continue as FEAR FACTORY, to make more records and to tour," he said. "That is why it is sad to hear that he decided to quit and, in my opinion, for whatever issues he has it seems like it could've been worked out."