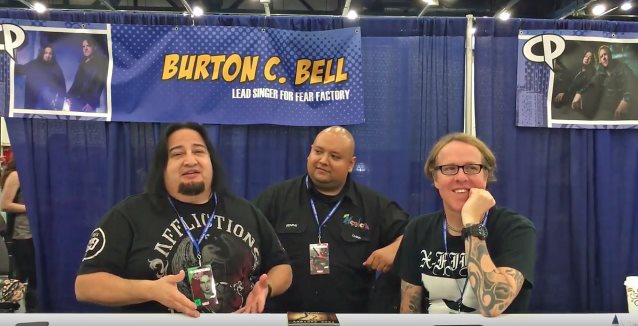 The Nerdery conducted an interview with FEAR FACTORY guitarist Dino Cazares and vocalist Burton C. Bell at this year's Comicpalooza, which was held June 17-19 in Houston, Texas. You can now watch the chat below.

Speaking about FEAR FACTORY's touring plans for the rest of 2016, Dino said: "We just got back from Australia, and we were in South Africa, so we just got back here literally three days ago and flew straight over for this convention. After this, we've got about a month off and then we're gonna be doing a show in Mexico City — it's called the [Corona] Hell & Heaven [Metal] Fest — on July 23. And then after that we fly over to Europe for a month. We've got a festival touring cycle; we're gonna do all the big festivals out there, summer fests. And then we come back and we'll probably do another U.S. tour in the fall, September-October."

As previously reported, FEAR FACTORY is rumored to be teaming up with Max and Igor Cavalera in the fall for the former SEPULTURA members' U.S. tour in celebration of the twentieth anniversary of SEPULTURA's "Roots" album.

FEAR FACTORY recently completed a U.S. headlining tour on which it performed its classic second album, "Demanufacture", in its entirety.