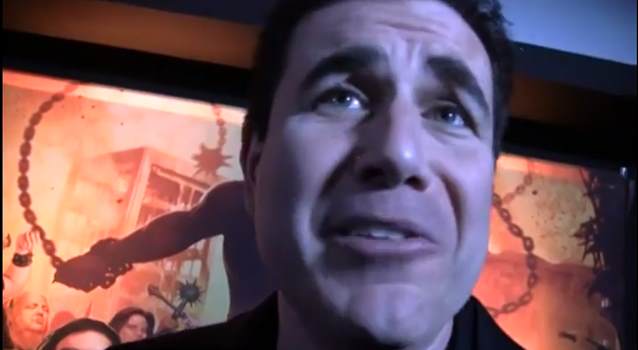 Heavy metal artist Marc Sasso (DIO, HALFORD, ADRENALINE MOB) recently completed the cover art and package design for the new Ronnie James Dio tribute CD, "This Is Your Life". The cover art, which depicts many of heavy metal's greatest icons charging into battle, was a labor of love for the artist who is a metalhead and Dio fan himself.

"When I was a kid growing up, I spent many hours drooling over the cover art of metal album covers, including RAINBOW, [BLACK] SABBATH and DIO," Sasso says.

"For this CD, I wanted to paint something detailed and busy that harkened back to the glory days of album art when you would buy an LP and stare at the cover while you were listening to the record. The piece is meant to feel epic in scale, pay homage to some of metal's greatest icons and be totally DIO all at once."

The proceeds from the tribute CD go to benefit the Ronnie James Dio Stand Up And Shout Cancer Fund, which was founded by Ronnie's wife and manager, Wendy Dio, after the singer's passing to stomach cancer in 2010. When asked by Wendy to design and create a cover and package that would somehow distinguish itself as a tribute release but simultaneously show the bands that participated, Marc came up with the idea of a "Dio Army" charging into battle to fight cancer. Wendy loved the idea as did the Cancer Fund and Rhino Records, who is distributing the CD.

After the initial sketch was approved, Marc shot photos of models in different poses based on his design. Each model portrayed a different metal icon running into battle, including Rob Halford, Glenn Hughes, Corey Taylor and members of METALLICA, SCORPIONS, MOTÖRHEAD, ANTHRAX and more. He then found photos of each musician to match his poses and combined them with his model reference. This became the blueprint used to paint each musician. Great detail was taken to make sure every metal personality was painted to look like themselves. In some cases, the musicians took photos of themselves and sent them over to Marc to use as reference. The entire illustration was painted digitally in black and white (which helps to speed up the process) with color overlays added last to bring it all to life.

Marc first began working with Ronnie when he created the cover art for "Killing The Dragon". Since then, he has created four DIO covers, including "Master Of The Moon" and "The Very Beast Of Vol. 2".

"The years that I worked with Ronnie and got to build a relationship with him and Wendy are special for me," Sasso says. "When I got the chance to not only meet him but actually create with him, it was very surreal, having been such a big fan since I was a kid.

"Ronnie was warm and personable and always treated me with respect. He and Wendy were the first people to hire me to paint an album cover and I've never forgotten that. He couldn't have cared less that I didn't come with any music credentials or accolades, he liked what he saw, and that was enough for him. Since then, I've gone on to work and develop relationships with a lot of great musicians. I went from painting denim jackets in high school to this. Unbelievable!"

In addition to creating the cover art, Marc designed the entire digipack and booklet as well.

For all his artwork and contributions to the cancer charity, Marc was presented with the "Long Live Rock And Roll" award by Wendy Dio at the Dio benefit and gala on March 17 in Los Angeles.

More information about Marc Sasso and additional images of the "This Is Your Life" artwork can be found at www.marcsasso.com.