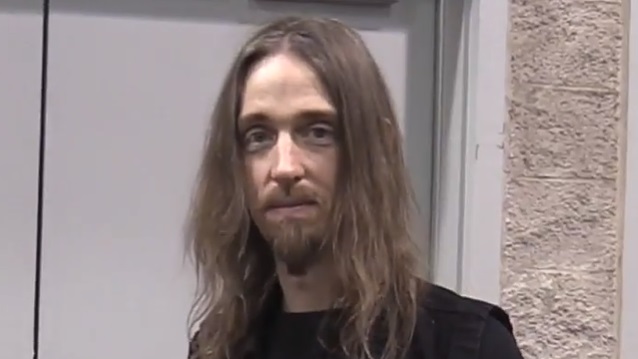 DIRK VERBEUREN On Playing Classic MEGADETH Songs: 'I'm Filling The Role Of Respecting That Material To The Best Of My Abilities'

Alex Haber of Heavy New York conducted an interview with MEGADETH drummer Dirk Verbeuren at the 2018 NAMM show, which was held January 25-28, in Anaheim, California. You can watch the entire chat below. A few excerpts follow (transcribed by BLABBERMOUTH.NET).

On whether a different mindset is needed to play MEGADETH songs versus songs in his previous band, SOILWORK:

Dirk: "Yeah, I would say the initial thing was pretty similar because when I joined SOILWORK, they also had, obviously, some music out, so I started learning those parts. Eventually, as we moved on, I was able to bring my own flair into the band. Now in MEGADETH, I'm kind of at that point where we're playing stuff that was already out, that was written in some cases, many, many years ago, so obviously, I'm filling the role of respecting that material to the best of my abilities. In that way, it's a little bit different, where in SOILWORK, I was a huge part of the creative process, especially in the latter five, six years."

On whether he will stick to the style of previous MEGADETH drummers or add his own unique angle on the band's next studio album:

Dirk: "Both. I'm definitely going to try to…I grew up as a fan of MEGADETH, for me, albums like 'Peace Sells [But Who's Buying?]', 'Rust In Peace', they were very important in my youth. I'm going to naturally, I think, have those flavors, of what those drummers brought in my playing, as well as, of course, having now played, mostly all of the songs on 'Dystopia' live for the past two years, that's definitely going to be there as well. I think both ['Dystopia' drummer] Chris [Adler, also of LAMB OF GOD] and all the other guys, they are kind of going to be 'watching me' when I'm recording."

On whether it's easier to start a band in Sweden than other countries:

Dirk: "I would say so. [Editor's note: Verbeuren is Belgian, although SOILWORK is based in Sweden.] I think there's an instant credibility that kind of happens for bands coming from those places. People just expect them to have a certain level of quality, which they often do have. There's a reason why, I guess." [Laughs]

On the diversity of the Swedish metal scene:

Dirk: "It's very diverse. I think a lot of it has to do with the fact, you look back going to bands like ABBA, there's always been a strong melodic quality that's always been present in Swedish music. People translate that in different ways. The SOILWORK guys, we listened to so many different things. It was really across the board. I think you can find a little bit of all of those influences in the music."

Verbeuren had been playing with SOILWORK for more than a decade before being recommended for the MEGADETH gig by Adler, who called Dirk "probably [one of the] top three drummers in the world."

MEGADETH is tentatively planning to enter the studio in mid-2018 to begin recording its new album for a 2019 release. The upcoming effort will be the first to feature Verbeuren. "Dystopia" was MEGADETH's first album with Brazilian guitarist Kiko Loureiro, who was previously best known for his work with ANGRA.