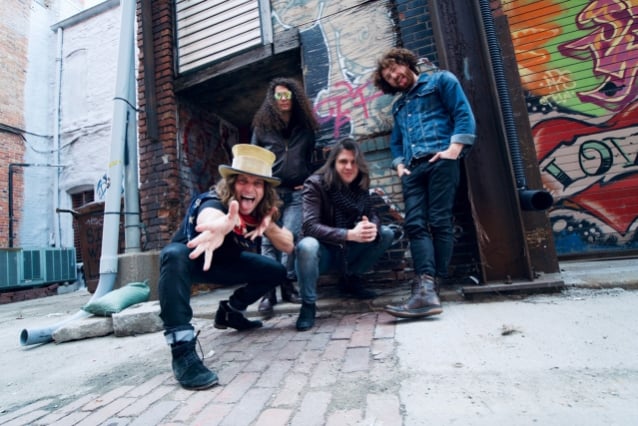 DIRTY HONEY Bassist Says 'It's A Good Time For Rock'

Andy Hall of the Des Moines, Iowa radio station Lazer 103.3 recently spoke with bassist Justin Smolian of emerging Los Angeles rockers DIRTY HONEY about the success they've had in 2019 as the only unsigned artist in Billboard's near four-decade history to hit No. 1 on the magazine's Mainstream Rock chart with their debut single, "When I'm Gone".

"It definitely went farther than we expected it to," Justin said (hear audio below). "None of us thought that would actually happen especially because we don't have a record deal. It's been a pretty unbelievable ride since March. It's cool. We recorded in November of last year at Byron Bay in Australia with our producer, Nick DiDia. He's a legend; he's worked with RAGE AGAINST THE MACHINE, PEARL JAM and STONE TEMPLE PILOTS, a lot of our favorite bands, so that was a magical experience even making it. And then to see it do so well, it's just a dream come true."

Smolian then shared his thoughts on RAGE AGAINST THE MACHINE's planned 2020 reunion shows, as well as the fact DIRTY HONEY has already opened for another one of his favorite bands, GUNS N' ROSES.

"I'm really excited," he said of RAGE's reunion. "I really hope I at least get to see them or play a show with them. Those are two of my favorite bands [RAGE and GN'R]. Everybody else I want to see come back someone is dead in the band. It's a good time for rock. I think bands want to get back together because the climate is right now."

Conversation then shifted to the 2017 formation of DIRTY HONEY. "Marc [Labelle, vocals] met John [Notto, guitar] at a club in Santa Monica," Justin said. "The drummer of the band at the time — it wasn't DIRTY HONEY; it was different — invited John to sit in and he sat in. Marc liked his playing better than the other guitar player so they started doing cover gigs and doing stuff together. I met John separately at a jam session at a house we both ended up living in the San Fernando Valley of L.A. We were working with another drummer at the time — the three of us were writing a lot of music. He brought us into the band. They had a different bass player and drummer at the time, then the drummer quit. I knew Corey [Coverstone, drums] from doing other gigs around town, so I brought Corey in. Once Corey was in, then we changed the name and started writing new songs and that's how the band came about."

DIRTY HONEY recently announced the "Rolling 7s" U.S. tour. The 25-date, coast-to-coast trek kicks off January 17 in Austin, Texas at The Parish and wraps up six weeks later in Los Angeles at the El Rey Theatre on February 28. Hotly tipped U.K. rock outfit THE AMAZONS will open on all dates.