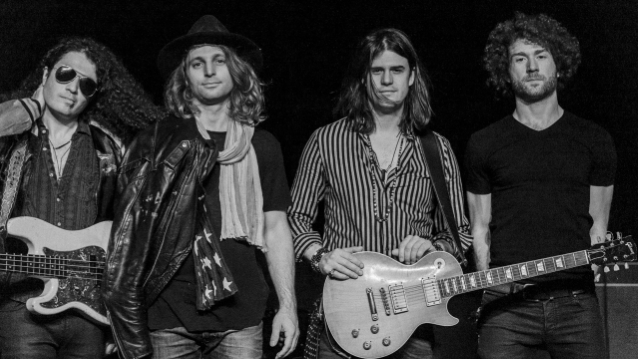 As a result of the COVID-19 pandemic, DIRTY HONEY was forced to cancel travel plans to Australia in mid-March to write and record new music with producer Nick DiDia (PEARL JAM, RAGE AGAINST THE MACHINE),but that hasn't prevented the band from figuring out a way to get it done. Since late March, the group — Marc LaBelle (vocals),John Notto (guitar),Justin Smolian (bass) and Corey Coverstone (drums) — has been holed up in its home studio/rehearsal space, writing and demoing a slew of new tunes with DiDia staying in the mix via Zoom. Recently, while working on the new songs, the band connected with DiDia at his Byron Bay, Australia studio, where they performed and discussed the tracks' progress. You can check out that Zoom video exchange and hear what the band's been working on below.

In terms of recording plans for the album — when and where — the band is still working out those logistics as they will be determined by any travel restrictions as pertain to COVID-19. DIRTY HONEY and DiDia are aiming to get into a studio, with everyone together next month, either in Los Angeles or Australia, or, as a backup, via Zoom, with the band in L.A. and DiDia in Australia.

To say that 2019 was a breakout year for DIRTY HONEY would be an understatement. The band released its self-titled debut EP in March 2019. Over the course of the last year-plus, DIRTY HONEY opened for THE WHO, GUNS N' ROSES and SLASH FEATURING MYLES KENNEDY & THE CONSPIRATORS, performed at more than a dozen major summer festivals, including Welcome to Rockville, Louder Than Life, Heavy Montreal, Rocklahoma, Sonic Temple and Epicenter, and played to SRO crowds at every show on its first-ever headline tour in December and January and February this year. DIRTY HONEY also made music history when it became the only unsigned artist ever to hit #1 on Billboard's Mainstream Rock Chart with its debut track "When I'm Gone". Additionally, the band was named Canadian Rock Radio's #1 International Breakout Artist of 2019. DIRTY HONEY's second single, went all the way to No. 4 at Rock Radio, and the band has racked up more than 28.6 million total streams.