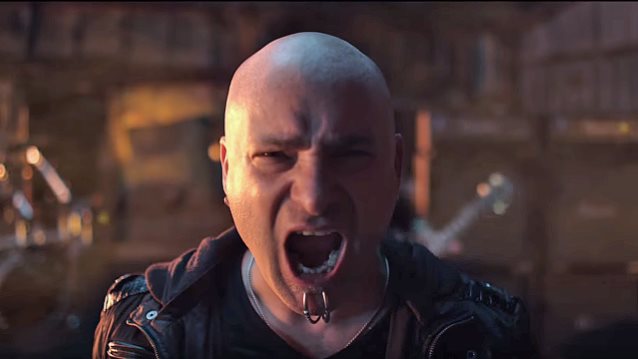 DISTURBED's 'Down With The Sickness' Sung By Animals (Video)

The latest animal song parody from video editor Insane Cherry is a an amusing cover of DISTURBED's 1999 classic "Down With The Sickness", as "sung" by dogs, cats, birds, and other animals. Check out the clip below.

Not 30 seconds into the original recording of "Down With The Sickness", DISTURBED lead singer David Draiman screams "ooh-wah-ah-ah-ah." He later told MTV about how his staccato vocals came about: "That noise just kind of came one day. The song originally was written and it just had a pause. Mike [Wengren, drums], his beat is just so tribal, and it just kind of made me feel like an animal." While the meaning behind the lyrics has been debated, Draiman said the lyrics were merely inspired by personal history and not a literal interpretation of his own upbringing. He told the Phoenix New Times: "I'm really talking about the conflict between the mother culture of society, who's beating down the child yearning for independence and individuality, and the submission of the child."

As previously reported, DISTURBED will release a new live album, titled "Live At Red Rocks", on November 18 via Warner Bros. The album features songs spanning DISTURBED's 20-year-career, including Mainstream Rock chart hits "Down With The Sickness", "Stricken", "Inside The Fire", "Indestructible", "The Vengeful One", "The Light" and their now-platinum-certified version of SIMON & GARFUNKEL's classic hit "The Sound Of Silence". "Live At Red Rocks" is available for pre-order via all DSPs, and those who pre-order will receive an instant download of the album track "The Light".

"Live At Red Rocks" captures DISTURBED's August 15, 2016 show at the fabled Colorado amphitheater where the band stopped during their tour in support of current album, "Immortalized".

"Immortalized " was officially certified gold on September 23 by the RIAA (Recording Industry Association of America) for sales of more than 500,000 copies. The certification came seven months after RIAA started including on-demand audio and video streams and a track sale equivalent in gold and platinum album award.

Posted by Disturbed on Wednesday, October 19, 2016