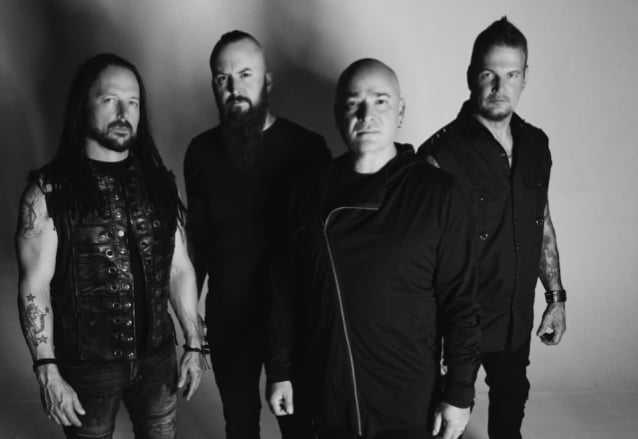 In a new interview with WMMR's Brent Porche, DISTURBED guitarist Dan Donegan spoke about the band's upcoming eighth studio album, which is currently being mixed for a tentative late 2022 release. Asked if producer Kevin Churko, who worked on 2015's "Immortalized" and 2018's "Evolution", has returned to work on the new LP, Dan said (as transcribed by BLABBERMOUTH.NET): "We actually went with Drew Fulk, an L.A. producer. I think he's a Carolina guy originally — he grew up in Carolina and then moved to L.A. He's done some good stuff with MOTIONLESS IN WHITE and ICE NINE KILLS and PAPA ROACH, a bunch of projects I really liked, some of the stuff he's done. And I reached out to him. I met with him — I think it was in December I went out there to meet with him — and just felt some good chemistry there, just being around him, and we jumped in the studio. He came out to Nashville — we ended up tracking in Nashville — and [it was] a great experience."

Asked if the writing and recording process was any different this time around due to the ongoing coronavirus pandemic, Dan said: "I've always had a lot of ideas archived and just kept in the vault. But then I think when we ran out and did those handful of shows back in November, we went down to Fort Myers on a couple of days off to work with a friend of ours, another producer, Dave Fortman, who did EVANESCENCE, GODSMACK, SLIPKNOT; he used to play in UGLY KID JOE back in the day. So we went out and we did a couple of days with him, just to kind of improvise and track some ideas, just on a couple of days off, and that got the ball rolling. So we just went with all-new, fresh material — nothing from the vault. I just started pulling out new ideas. And it just progressed from there."

Earlier this month, DISTURBED released "Hey You", the first single off the upcoming album. The official music video for the song was directed by Josiahx. DISTURBED frontman David Draiman called the track "a wake-up call. We've become our own worst enemies," he said. "Civil discourse has become the exception instead of the norm. People have lost themselves in outrage addiction."