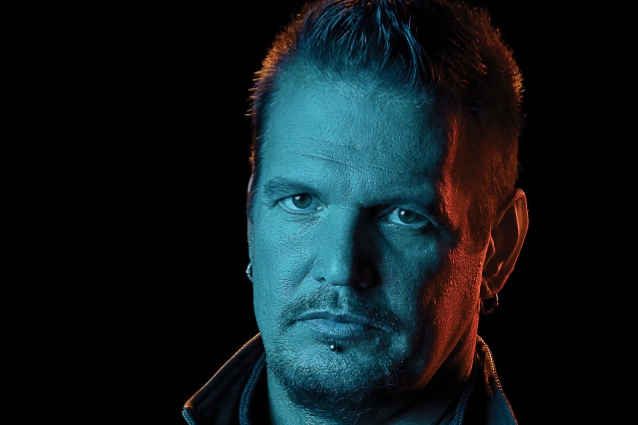 DISTURBED Guitarist On Message Behind Addiction-Inspired 'A Reason To Fight': 'It's A Disease, And You're Not Alone'

Prior to DISTURBED's performance at the recent Sonic Temple Art + Music Festival in Columbus, Ohio, guitarist Dan Donegan spoke with Ronni Hunter of the city's 99.7 The Blitz radio station. The full conversation can be seen below. A few excerpts follow (as transcribed by BLABBERMOUTH.NET).

On the fact that the band's debut, "The Sickness", will celebrate its 20th anniversary next year:

Dan: "That's insane. Those songs, we've written them over 20 years ago — the ones we demoed before we had the record deal. It's amazing that they stood the test of time, and it's amazing that I still actually enjoy playing them."

On the origins of "Are You Ready?", the first single from the group's latest album, "Evolution":

Dan: "It's a song I wrote musically in 2004. We never finished the song. We had it when we were writing the material for 'Ten Thousand Fists'. We had so much material, and I had that on the back burner. I had the idea musically, and we'd already picked out what songs we were going to prioritize for the album at the time, and I just never really presented it to the guys, so I put on the back burner. Going back through the archives this time around, I'd go back to that song — I'm like, 'Oh, wow. This is cool. I forgot about this one for a bit,' and I kind of snuck it back in when I was showing some of the demos to the guys. I have a habit of bringing in stuff that I've always liked, and if it gets somewhat overlooked or passed on, I find a way to sneak it back in. I didn't say anything when I did it — I just kind of played it. Right away, David [Draiman, vocalist] was listening, and he calls me up — he's like, 'Dude, I've got something for this one. It's great.' After he showed me the idea melodically he had for it, I'm like, 'Okay, now I know this is going somewhere. Now I can let him know it's something that was started in 2004.' It's got a really cool groove to it. It's got some of the old-school, electronic vibe that we had more of in those early days of DISTURBED. It was kind of cool that we were able to bring that back stylistically and throw it into the mix. It turned out great, and we thought it would be a great song to start out and introduce this album with."

On the inspiration behind recent single "A Reason To Fight", which tackles depression and addiction:

Dan: "I think the first time it really hit me was when [actor/comedian] Robin Williams died. In the past, I used to always get angry and think that [suicide] is very selfish, and I'd get angry and think, 'How could somebody do this?' Then you look at somebody like Robin Williams, and you're, like, 'This guy makes everybody in the world laugh. Everybody loves him. He has family, money, success.' You think you have a perfect life, and then it dawned on me that this is a disease. They can't help that. It's like a cancer — it can take anybody at any moment. Early on, when we started talking about subject matter that we wanted to touch on [on] this album, I suggested to David — I'm, like, 'I'd really like to try to find a song that can touch on depression and addiction,' because we've all had either family friends or close people to us that have had their struggles, or continue to struggle. I have my older brother that's had his struggles. He's on and off, and I know what a great guy he is, and I can hear it in his voice and see it in his eyes of feeling like he's let people down. I thought it was important for us to try to address the issue to let people know that it's nothing to be ashamed of. It's nothing to be embarrassed by. It's a disease, and you're not alone... We're in this together. It's important for us to get that message out there. We're not trying to claim that we're saving the world – we're just trying to shed light on a dark subject, and trying to encourage people that when you see the signs, jump in and do what you can to try to offer a hand."

On the group's upcoming performance in Israel:

Dan: "The fans have been begging us for years to come there. Usually when we're over in Europe, we have a lot of fans from Israel that have come over to other parts of Europe to see us because we've never made the trip yet. We're excited to be going there for the first time. We'll end that [tour] there so we'll have a couple days off at the end of it to do some sightseeing and get around and meet some of the fans out there."