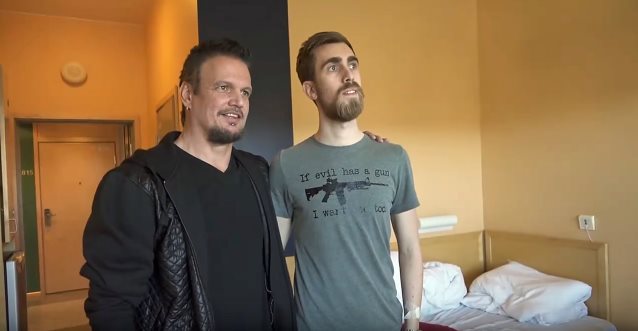 DISTURBED guitarist Dan Donegan paid a surprise visit to a fan in the hospital in Norway on Friday (March 10) after learning the 27-year-old couldn't attend the band's concert in Oslo because he had just undergone a couple of surgeries. Donegan spent a few minutes chatting with Svein Heibø before giving him a DISTURBED "Immortalized" tour t-shirt and a signed drumhead.

Said Dan: "A fan private-messaged me the other day to tell me how bummed he was 'cause he planned to see our show in Oslo, Norway but he's been in the hospital for the past three weeks and underwent two surgeries and wouldn't be able to come. I thought I would drop in to surprise him."

Video footage of Donegan's hospital visit can be seen below.

DISTURBED has just completed a European tour as the support act for AVENEGED SEVENFOLD.

DISTURBED is planning to return to the studio later this year to record an acoustic EP before beginning work on the follow-up to 2015's "Immortalized" album.