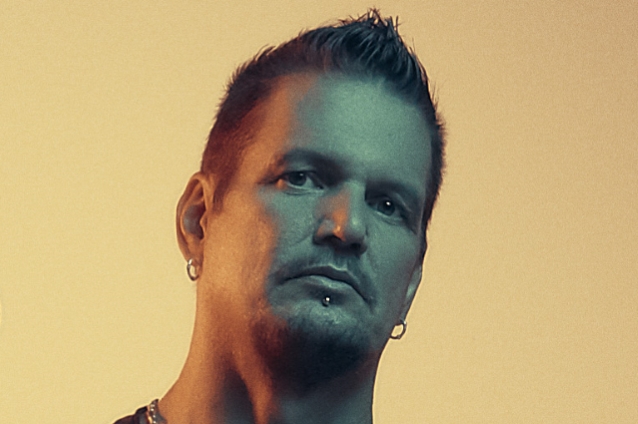 Guitarist Dan Donegan spoke to Rock 100.5 The KATT about the lyrical inspiration behind "A Reason To Fight", the second single from DISTURBED's latest album, "Evolution", which was released last October. The song tackles depression and addiction and was written in part about vastly talented and beloved people we lost too soon due to addiction and depression, such as Chester Bennington from hard-rock peers LINKIN PARK.

"It's just such a deep message," Dan said (see video below). "Early on, when we were discussing topics of what we wanted to touch on, writing these songs, we put our heart on our sleeve. We knew it connected big with us personally, 'cause we've all had either family members or friends that had battled those demons of depression or addiction. So to play it night after night now and see the reaction from the fans out there, it's amazing to see how many people are open to it. You can see some fans that might be some hardcore kid getting in a moshpit the song before, and then we play that song, and that same big dude is in tears, 'cause he's got his own personal struggles that he may be dealing with."

According to Donegan, "A Reason To Fight" was a last-minute addition to "Evolution", which was once again recorded The Hideout Recording Studio in Las Vegas, Nevada with producer Kevin Churko. "That was something that almost didn't happen, because musically, I had part of the idea, and I didn't have enough of it to where I was ready to present it to the guys," the guitarist explained. "And we had downtime in the studio — I think Churko was miking up the drum kit — and I just started playing that intro piece in the control room, just killing time. And then David [Draiman, vocals] happened to be in the room, and he was, like, 'Wait a second. Keep playing that. Just loop that part over and over.' And it just started to come together. He had a great melody for it right away, and we made it a priority. But if it wasn't for that moment, that might have been backburnered as well, because it just happened to be the right time, the right moment. And surprisingly, it's probably the first time where we had a videographer with us in the studio who captured the moment as it was happening, which I don't think has ever happened in our career of writing something on the spot and then capturing it on video. I haven't seen the video — I know it exists — but it's great to know that we got a great song out of it and we have footage of it as it happened."

DISTURBED is currently in the midst of an international tour, though they did recently come home for show-stealing performances in Columbus (Sonic Temple Art & Music Fest) and Oklahoma (Rocklahoma). Upcoming dates include shows in Russia, Poland, Israel, Prague, Athens and more.