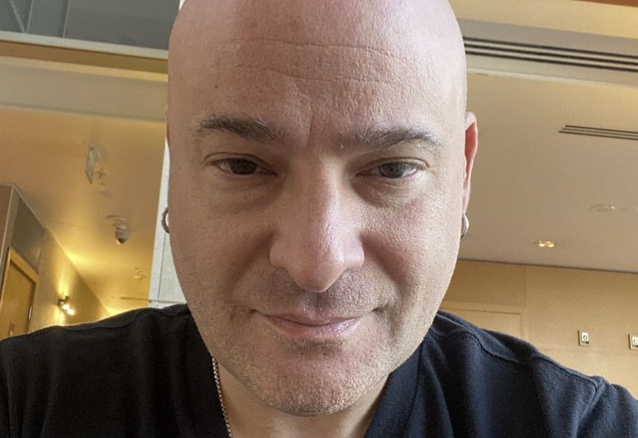 DISTURBED Singer Doesn't Care If He Alienates People With His Pro-Israel Comments: 'I Really Don't Give A S**t Anymore'

DISTURBED frontman David Draiman, who is of Jewish descent, spoke to The Jerusalem Post Podcast about his decision to reactivate his Twitter account after a nearly seven-year absence.

The 48-year-old Hawaii-based rocker, who recently announced plans to relocate to Miami, said of his return to the social media platform (as transcribed by BLABBERMOUTH.NET): "It's difficult sometimes knowing how much animosity exists for not only our people but for the state of Israel and that has been continuing to build and perpetuate over the course of the past 15 to 20 years specifically. I've seen tangible changes over the course of my career and my life, and I felt the need to return to social media on a more public level because of how bad things have gotten."

Asked what he noticed specifically that made him want to express his views publicly on social media, Draiman said: "Oh, God. The number of blatant, public, unapologetic attacks that have occurred in particular of late, particularly over the course of the past three to five years, really, really hit a nerve with me. Jews are attacked on the streets of New York City, whether it's Brooklyn or anywhere else, on a regular basis at this point. The attacks occur in Los Angeles; they occur in Southern Florida — they occur all over the place… And [the attackers have] been emboldened from several factors from a world that has become increasingly demonizing of not only Israel but of Jews in general. There's nothing like a good pandemic to make all the conspiracy theorists of the world foam at the mouth at the opportunity to blame the Jewish people again for some aspect of their suffering. It's just a very, very frightening time to me. And being a parent in this world to a child of a mixed family — a mixed family that consists of two of the demographics that probably currently are the most attacked, Jews and Asians — I felt very compelled to try and see if I could once again utilize this platform that I've been blessed with and follow my conscience a little bit more."

Draiman went on to say that he isn't concerned about alienating any of the DISTURBED fans with his vocal and public stand to defend Israel. "Thankfully I've reached a point in my career where I really don't give a shit anymore," he said and laughed. "If somebody wants to go ahead and cast their stones at me, they know that I'm very, very careful about separating what I do as a musician from who I am as an individual, and if they can't come to terms with it, then that's their problem. I honestly don't see people not coming to our shows because I'm continuing to talk about something that they've already known for two decades. I don't care. I've made my money, we have our band, they know who I am, I know who they are, and they love us for it regardless."

In December, Draiman said that he had lost thousands of social media followers since publicizing his trip to Israel in November.

On November 30, Draiman lit a candle at the Western Wall in Jerusalem, Israel at the Old City site of the terror attack that killed South African immigrant Eli Kay. He later claimed that he lost 4,000 followers after sharing photos of his "demonstration" at the Western Wall.