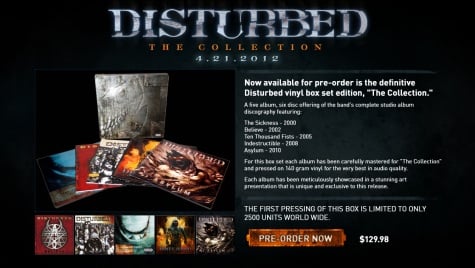 To commemorate Record Store Day, DISTURBED will be release a definitive vinyl box-set edition, "The Collection", on April 21. The five-album, six-disc offering includes the band's entire full-length catalog and is pressed on 140-gram vinyl. You can now pre-order the box set at this location.

About Record Store Day: Record Store Day is managed by the Music Monitor Network and is organized in partnership with the Alliance Of Independent Media Stores (AIMS),the Coalition Of Independent Music Stores (CIMS) and celebrates the culture of independent record stores by playing host to in-store events/performances, signings and special product releases on a global scale.

DISTURBED went on an open-ended hiatus last fall, following the completion of the touring cycle for its 2010 album "Asylum".

DISTURBED has not indicated when it plans to return, although all four members say it's not likely that the group will stay away for good.

DISTURBED released its first-ever collection of B-sides and rarities, titled "The Lost Children", last November. The set includes a previously unreleased song called "Mine" as well as a benefit track for the West Memphis Three titled "3", plus tunes that previously appeared only on soundtracks or as bonus cuts on international editions of the group's albums.