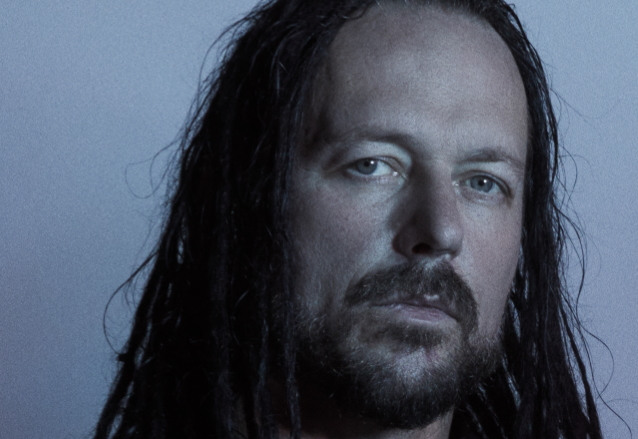 "It's really interesting 'cause the last album, as you recall, was [2018's] 'Evolution'," he said. "And 'Evolution', almost half that record was kind of acoustic. We were really pushing ourselves to do something different, and we had some great tracks off that — 'A Reason To Fight', 'Hold On To Memories'. And it's great, because now our live show has these acoustic moments that go along with [our cover of SIMON & GARFUNKEL's] 'The Sound Of Silence'. But at the end of the day, we're always gonna be a hard rock, heavy metal band that's angry. And so this record, it wasn't even forced; it was, like, 'This is where we're at now. We did that. Let's get back to our roots. Let's get that heavy…' I think David is sounding the best — David Draiman, our singer for DISTURBED — I think he's never sounded better. He sounds incredibly powerful. Nothing is over-produced. It's very visceral. His lyrics are just on fire.

"People talk about the fact that, like, 'Oh, you guys have had some success. How can you still be angry?' Just look around at the world, bro," he continued. "There's plenty to be angry about and talk about. And someone like David Draiman, he's a really smart guy; he really stays informed.

"I say this a lot about DISTURBED. I think a lot of people get into DISTURBED because of the music. Dan's [Donegan] a really heavy, powerful guitar player. No one really plays drums like Mikey [Wengren]. Mikey and Dan have this syncopation that they do together. And me, I'm just there laying as thick a bass as I can to support these guys. And I think that's why people get into DISTURBED. But I think people stay because of the messages that David puts in those lyrics. And I think this new 'Divisive' record is filled with all kinds of powerful messages that our fans — and not just our fans, but even new fans — would really like."

Donegan's divorce inspired the "Divisive" song "Don't Tell Me", which is a duet with HEART's Ann Wilson. In two decades, it breaks ground as the first-ever guest collaboration on a DISTURBED record.

According to Billboard, "Divisive" sold 26,000 equivalent album units in its first week of release, with 22,000 units via album sales.

DISTURBED has had five No. 1s on the all-genre chart, beginning with "Believe" in 2002.

Draiman previously stated about the "Divisive" album title: "Partisan tribal warfare has become a part of our regular existence nowadays. It's one big battle of the cliques. The whole idea of the record is to be a wakeup call for everyone. Our society has become addicted to outrage. Music is the best cure for what ails us though. If only everyone reached out and used it. There's no better environment to forget about all of this shit than live music. We can be together and realize we have more in common than not. Recognize what's happening and let's make a change for the better."