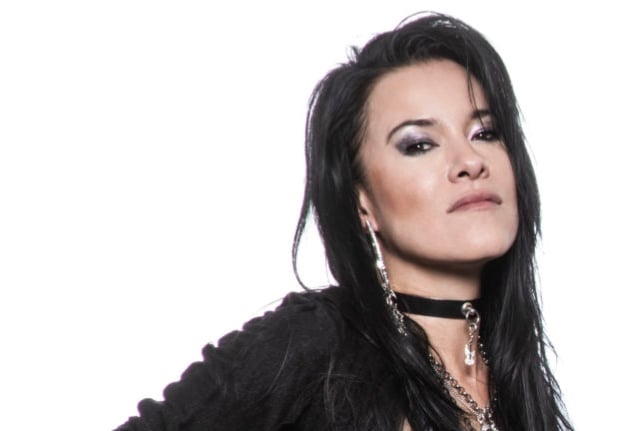 Does EVANESCENCE's JEN MAJURA Get Annoyed By Fans Filming Entire Concerts On Their Cell Phones? She Responds

In a new interview with "The Metal Gods Meltdown", EVANESCENCE guitarist Jen Majura was asked if it annoys her when she is on stage and people are filming the concert with their cell phones rather than just enjoying the show. She responded (hear audio below): "I have a very brief and correct answer for this one, but I would like to elaborate after that. So the answer would be it doesn't bug me when they turn their phones around and put the spotlights on, because that is beautiful. When they do not film, but instead of lighters — back in the day, you would burn your thumbnail by holding the lighter for the ballads and everything. But nowadays, people use their cell phones and put on the flashlight.

"We have moments of… I was crying on the side of the stage when Amy [Lee, EVANESCENCE singer] played 'My Immortal', for example, and she's all by herself on that big stage with a grand piano and she starts playing the song and she starts singing," Jen continued. "Everybody sings along, and then, when there's the first musical break, she tells the audience, 'Yeah, show me your lights,' and you can literally watch within — I don't know — 10 seconds, this whole place illuminates; like, every single cell phone is a flash light, and it's so beautiful. People haven't seen that from the view that we are allowed to have on the side of the stage before we join the song, and it's just such a magical, beautiful moment each time it happens.

"That being said, I fucking hate cell phones in my face all the time, because I'm totally old school," the 36-year-old Majura added. "I would go to a concert and freak the hell out and just sing along and dance and have a great time and experience the whole thing. And I do not really understand — that will give me a lot of enemies now again — but I don't really understand people who would… My arm sometimes hurts when I watch them holding the phone the whole show. So I'm not a big fan of behaving like that, because, first of all, you block the view for others, who maybe just wanna enjoy and sing along and dance. And also, you're missing the moment. [Laughs] But I guess that's something only older people — not older people, but people from my generation, we used to grow up with going to concerts and bracing ourselves for a whole night of having a great time, singing along and jumping and dancing. And you would come back home after a show and be completely exhausted. And nowadays a lot of kids go to those shows and they just stand still the whole time holding their fucking phone. I kind of get it, because they were born into this media-overload world, so they don't know better. But I wouldn't judge them — that's why I'm saying it's not their fault; they don't know it different. So maybe that's their way to enjoy a concert — you just stand there until your arm almost falls off your body, and then you would go back home, put your phone to the computer and watch the whole concert on your screen at home while you eat some nachos. I don't know. Maybe that's the new enjoyment for young people to see a concert. But lucky enough, I know a lot of our fans, a lot of them — and I can see it in their eyes, because when we're on stage, we see everyone — and we have a lot of fans that still are into the whole concert thing. They jump around, they sing along, they cry — which I always have to be careful, because when I see people crying… 'My Immortal', for example, when the band kicks in and the light is really bright and you can see everybody's faces and everybody's crying, I'm bad at shit like that. Because I'll look at somebody who cries and I would start crying too. That's impossible on stage — you can't cry. So I'm a little bit of a wet blanket sometimes when it comes to emotions in combination with music. But, yeah, we still have those fans that dive into the concert experience, which is a really beautiful thing. And these are the guys that I really focus on, because they give the energy back. Nobody holding up a cell phone gives energy back to me."

EVANESCENCE is currently in the studio working on a brand new album and will be releasing the first offering from it very soon.