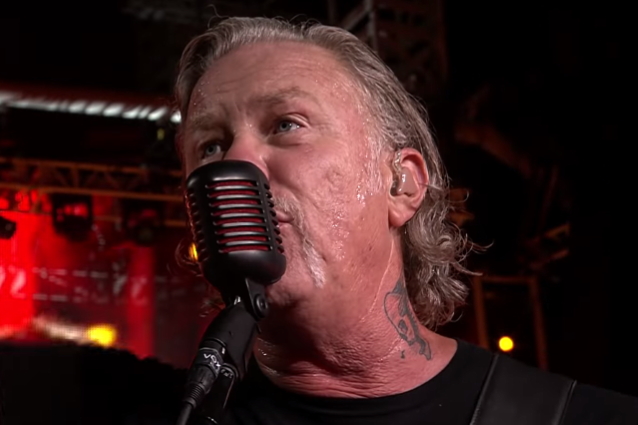 METALLICA will launch a new concert series, "#MetallicaMondays", where the band will stream the complete video of a METALLICA live show for fans on the group's YouTube channel and on Facebook every week.

The heavy metal giants announced the series in a social media post earlier today. The band wrote: "While we're all doing our part and staying home, we find ourselves missing live music, so how about we dive back into a few of our favorite shows at a socially responsible distance? Not to sound too cheesy, but now more than ever, we're in this together, and staying connected is how we'll get through it. With that in mind, we're bringing a series of Live METALLICA shows right to your couch!

"Starting at 8 PM EDT tonight, we'll be debuting our brand new concert series, #MetallicaMondays, where we'll stream the complete video of a live show for you on our YouTube channel and on Facebook every week.

"We're kicking it off with an iconic location, so please tune in tonight to watch METALLICA: Live at Slane Castle - June 8, 2019.

"Slane is just the beginning… tune in weekly for #MetallicaMondays to get a taste of live METALLICA. We know… it's not quite the same as the real deal, and trust us, we wish we could be out there with you again!

Earlier today, METALLICA announced that its South American tour, which was originally planned for April, has been postponed until December. In addition, the band's appearances at three Danny Wimmer Presents-produced festivals in May have been canceled: Epicenter in Charlotte, Welcome To Rockville in Daytona and Sonic Temple in Columbus.

Need to take a break from Netflix before you binge-watch the entire library? Introducing our brand new concert series:...