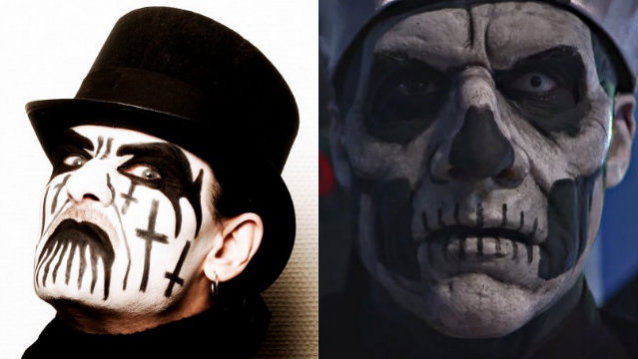 In a brand new interview with Musik Universe, Danish heavy metal legend King Diamond was asked for his opinion on recent comparisons that have been drawn between Swedish occult metallers GHOST and both KING DIAMOND and MERCYFUL FATE in terms of the overall sound and stage presentation.

"I've seen a video or two [from GHOST and]I think they have their own thing," King said. "They don't remind me of KING DIAMOND or MERCYFUL FATE at all. I don't hear it. I mean, there's barely any guitar solos in GHOST. We can barely start a song before we have three guitar solos. [Laughs] There's not the complex riffing [in GHOST] that's going on. With GHOST, it's much more… I would compare them much more to BLUE ÖYSTER CULT, you know. They are very melodic, I think, [and] there's no falsetto singing at all. It doesn't remind me of KING DIAMOND or MERCYFUL FATE at all, actually. I heard one riff that reminded me of a MERCYFUL FATE riff, but it had a whole different sound. It was not like I said, 'Oh, man, they're stealing [our ideas].' Not at all."

He continued: "I don't think that they should even want to be like us, even if they could, but I don't think anyone can be like that. But I think that they have very much their own thing, which is good. Who wants to sound like someone else? You wanna [have] your own [sound], if you can. And I think they have a very unique, old-fashioned sound. They sound old. They sound like Seventies style, which is what they want too, I'm sure.

"I see that they have said that they are inspired by us, but you can be inspired in many ways by putting on a certain show, or [drawing influences from] a certain time period.

"I am very inspired by the Seventies. My favorite singer is David Byron, who is not with us anymore, from URIAH HEEP; [he's] the absolute top vocalist of all time for me. LED ZEPPELIN is what made me buy my first electric guitar; the Jimmy Page guitar sound.

"Those people that say that [GHOST sounds like MERCYFUL FATE], I don't hear it. [When I listen to GHOST] I hear BLUE ÖYSTER CULT-style music. Where are all the [musical] complexities and the extreme progressive riffing and guitar solos or vocals that are all kinds of ways [which are present in MERCYFUL FATE's music]? [GHOST's songs are] much streamlined and melodic, you know. That's also why they're signed to a major label. They're streamlined and they appeal to a lot more people, because it's safer and all this stuff.

"I think they're doing a great job with what they do, but I don't think it's fair to them either to compare them to us. Just because they say that they like what we do — that's an honor to hear, of course. But that doesn't mean… Just 'cause you like what others do or you're inspired… You can be inspired on many levels. Like I said, I was inspired by the Jimmy Page guitar sound to get an electric guitar, but I never tried to sound like LED ZEPPELIN does. I mean, why should I do that? Same thing with my makeup. Yeah, I was inspired to use makeup from seeing… but not just Alice Cooper. I often mention Alice Cooper. I don't wanna sound like Alice Cooper or be confused with him at all, and I certainly don't think we are. But he also… someone else [did it] before him — Arthur Brown and others. And then he's developed it into certain things. But before I saw Alice Cooper live in '75, I had seen GENESIS with Peter Gabriel in '74. [And that was] a huge inspiration for show production, seeing their show. It was amazing. So that was an even bigger inspiration, show-wise."

In a 2012 interview with SF Weekly, one of the Nameless Ghouls from GHOST stated about the band's musical influences: "Several of us in [GHOST] — myself included — are deeply rooted in the metal scene. Both KING DIAMOND and MERCYFUL FATE are bands I've been listening to for 20 years. It's undeniable that records like 'Melissa' and 'Don't Break The Oath' are groundbreaking records and very much an influence on the band. BLUE ÖYSTER CULT and BLACK SABBATH have also played a major role. But a lot of doom and bands that are in the scene that we're usually connected with are probably a bit more influenced by the harder stuff of BLACK SABBATH. Usually they sound like 'Symptom Of The Universe' or 'Children Of The Grave'. That's all they wanted to sound like. And most doom bands are trying to sound like a less-produced version of the '70s, whereas I think in connection with BLACK SABBATH, we try to be as bold as they were when they did their ballads or their orchestral songs. We want our record to sound like a million-dollar production, but from 1978."

He continued: "It's weird, because a lot of these really hardcore metal guys always refer to Sabbath Bloody Sabbath' as being a miracle, groundbreaking proto-black metal album, where it's actually one of the softest BLACK SABBATH records. [It's] very mournful and openhearted. That same boldness is something we try to ... I'm not saying mimic, but we encourage ourselves to be very playful in the music that we're doing. We're not trying to fit in or think too much about what's cool or not. It's supposed to be passionate.

"I think you [would br] really dead on [in saying] that BLACK SABBATH and MERCYFUL FATE are necessary bands to have a band like GHOST."