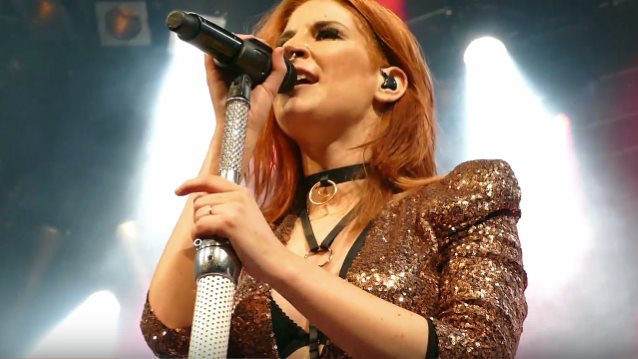 Does Sexism Exist In Music Industry? DELAIN Frontwoman Weighs In

RAMzine recently conducted an interview with Charlotte Wessels (vocals) and Martijn Westerholt (keyboards) of Dutch metallers DELAIN. You can now watch the chat below.

Asked if they think sexism still exists in the music industry, Charlotte said: "I think it exists everywhere. I don't necessarily think that it exists more in the music industry than elsewhere. Metal in particular is an interesting genre, because it has always been associated with some very masculine traits. But if you look at the complete picture, if you consider a hundred years ago when we were not even allowed to enter music schools, then I think that we're actually catching up pretty quickly. And, of course, there is still some things. For example, the fact that we have a second guitarist now [who is a female]. Everyone keeps asking me, 'Hey, Charlotte, how is it to have another woman in the band?' And I'm, like, 'Please just ask me how it is to have another guitarist in the band. It does her so much more justice.'"

She continued: "So, of course it's there, but it's everywhere, and it just depends on also how you portray yourself and what you do."

Charlotte went on to describe one particular incident with a journalist that underscored the problem female musicians face while trying to establish their own identity.

"A while ago, I had an interviewer ask me, 'So, hey, Charlotte, there are quite some bands with female vocals now in the industry," she recalled. "So what do you do to sound different?' I was, like, 'Well, first of all, would you ask the same question to a man?' And that kind of shuts the entire validity of the question. He didn't mean it bad at all, and I was actually feeling bad, because he was feeling bad after that. But the question itself is just…" Her voice trailed off as she expressed her bewilderment.

Wessels added that women are not the only ones that have to deal with everyday sexism in ways their male colleagues do not.

"I think that you see these things both ways in a lot of other jobs too," she said. "For example, when nowadays more men are going into child care. They are experiencing the same thing, where they are kind of entering a scene that was [run primarily by women]. I think that's the same in any kind of working environment that was very much dominated by one gender and then the other kind of mixes in. There's always that kind of awkward moment: 'How do we do this?'"

As previously reported, DELAIN will take part in a very special run of shows in October, dubbed the "Danse Macabre" tour. Joining the band for this exclusive set of dates is longtime friend and collaborator, NIGHTWISH lynchpin Marco Hietala. Having contributed to most of DELAIN's records with guest appearances and after worldwide requests from fans, DELAIN and Hietala will now storm the stage together on the "Danse Macabre" tour.

DELAIN and HAMMERFALL will join forces for a co-headline North American tour in April/May. This trek will be DELAIN's first run of U.S. dates in support of its new album, "Moonbathers", which was released last August.